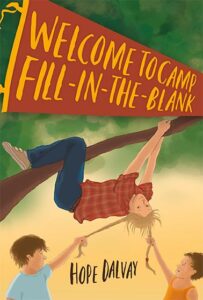 CHAPTER ONE: A WAKE-UP CALL AT NIGHT

My eyes suddenly fluttered open. Then I heard the sound that had roused me awake: the wail of sirens, lots of sirens. I slipped out of bed and padded down the carpeted stairs in search of my parents. I sighed with relief when I spied them relaxing on the living-room couch. My parents were so engrossed in the TV show they were watching that they didn’t even notice me standing there in my pajamas. I cleared my throat to get their attention.

“What’s up, little chick?” asked Mom, with a look of concern on her face. “Did you have a bad dream, Page?”

“The sirens woke me up. What’s going on?” I asked.

“Maybe ambulances are rushing to a car accident,” offered Dad. “You know how dangerous the driving is here in Riyadh.”

I nodded. The sirens continued to wail.

“Why don’t you go back to bed? You’ve got school in the morning,” reminded Mom. “Maybe there will be an article in the morning newspaper about what happened,” she added.

“Okay, Mom,” I said. I turned and headed upstairs to my bedroom. The sirens eventually faded away, and I drifted off to sleep.

My eyes suddenly fluttered open again…not to the wail of sirens, but to this disturbing sound: deee ehhh errr…deee uh deee uh. The unmistakeable sound of our dial-up internet. Is there any sound more annoying? I thought. My mom was probably checking our email. It was part of her early morning ritual before heading to work. I decided to get up. It was time to get ready anyway, if I wanted to catch the bus. A typical school morning for me involved eating breakfast, dressing in my school uniform, boarding a blue-and-white bus filled with identically clad children from my compound, and travelling across the city to attend a British school. Because we’re Canadian, my parents would have preferred to send me to a Canadian school, but none existed in Riyadh.

As I crawled out of bed, I heard Mom making an inter-net phone call, which was an odd thing for her to do on a Tuesday morning. Because of the time difference, she normally called her family in Canada on our weekend, which was Thursday and Friday in Saudi Arabia.

My mother was born and raised on Prince Edward Island, Canada’s smallest province. Prince Edward Island, commonly referred to by its abbreviation “PEI” or simply as “the Island,” is so small that it is sometimes left off maps—much to the chagrin of its inhabitants, who like to be called “Islanders” with a capital letter “I.” On an accuratemap of Canada—that is, a map depicting all ten provinces and three territories—Prince Edward Island is an island (duh) located on the east coast. Although there are lots of islands on the east coast of Canada, it’s easy to spot which one is Prince Edward Island. It’s the one that looks like a crooked crescent moon…or a bumpy banana…or a jagged smile. Whenever people in Saudi Arabia asked me where I was from, I told them that I was from Canada. And if they asked me where in Canada, I said I was from Prince Edward Island, even though I’d never actually lived there. I knew this answer would stump most people, and I secretly liked the idea of being from a place that no one had ever heard of. I thought it made me sound mysterious. I was always shocked whenever I met someone who had heard of Prince Edward Island. Most often they were aware of its existence because they’d read L. M. Montgomery’s most famous book—and my favourite book of all time—Anne of Green Gables, which was set on the Island.

I groggily shuffled down the stairs, thinking about what I wanted to eat for breakfast. Hmm…maybe some leftover grape leaves stuffed with rice? A strange breakfast choice, I must admit, but that was what I was craving. I froze at the foot of the stairs when I detected distress in Mom’s voice.

“I just received your cryptic email. Why did you ask if we’re still alive? Why would you ask me something like that?” said Mom.

“Pollyanna, I’m so relieved to hear from you! We heard about the car bombings. Was your compound hit? We’ve been beside ourselves with worry!” I recognized the frantic voice. It belonged to Nanna, my maternal grandmother.

“Several Western compounds in Riyadh were attacked a few hours ago. It’s all over the news,” said Nanna.

As soon as Nanna said the words “car bombings,” Dad, who had been making breakfast in the kitchen, zoomed to the television to switch on BBC World. I wandered into the living room and stared at the images of destroyed build-ings and rubble on TV. This explains all those ambulance sirens last night, I thought. When the news announcer identified the compounds, I turned to Dad in panic. I recognized the name of one of them. It adjoined my school, and many of my teachers lived there. “Do you think my teachers are okay?” I asked.

Normally, Dad would have said something comforting to downplay the situation so I wouldn’t worry, but this time he just said, “I don’t know.”

After assuring my grandmother that we weren’t dead, Mom got off the internet phone and joined us in front of the TV. Over the past several months, there had been a few minor car bombings—as if a car bombing could be described as minor—in Riyadh, so this tragic event shouldn’t have been that surprising. Nevertheless, it still came as a shock to us.

A few moments later, Mom said, “Page, there won’t be any school today, but your dad and I still have to go to work. Try not to watch too much news while we’re gone, and stay inside, okay?”

They each gave me a quick hug and hurried to get ready for work. I stood rooted to the spot in front of the TV. As they gathered their things and opened the door to leave, I heard Dad remark, “In Canada, school is cancelled for snowstorms, but here it’s for car bombings.” The door clicked shut before I could hear Mom’s reply.

Hope Dalvay began writing her debut middle-grade novel Welcome to Camp Fill-in-the-Blank as a way to “escape” the notoriously harsh winter of 2015 in her home province of Prince Edward Island. As a child, Hope was often found with her nose buried in a book, blissfully lost in another world. Her love of words continued into adulthood when she fell into a career as a copyeditor.