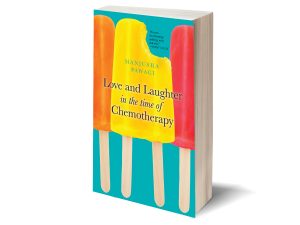 For a writer to elicit tears and exuberant laughter in the same book is an accomplishment. Such is the triumph of Manjusha Pawagi’s memoir, Love and Laughter in the Time of Chemotherapy.

For those who have not had to endure the anguish, nausea, depression, fatigue of cancer treatment, Pawagi’s memoir informs us. When she goes to the hospital for a minor procedure, doctors discover she has leukemia and must be treated immediately. “Usually you’re never tested,” she says. “You skate on the surface of an ordinary life, not realizing how lucky you are that the ice is holding you up.”

The reader is right with her as she describes agonizing pain. A nurse or doctor saying, “You may feel a little pressure” is a statement to dread. The fevers, diarrhea, vomiting and nightmares that chemo induces are so relentless, Pawagi starts hallucinating and must force herself to open her eyes to realize she is not wandering in a post-apocalyptic war zone. We are privy to the indignities and discomfort of an ileostomy bag, of having her diaper changed, of being finally able to go to the bathroom in her wheelchair only to find the door won’t close. Walking on her own after months of being bedridden is just the beginning of a slow stumble up an enormous incline.

But interspersed among these horrors is Pawagi’s humour. She says that rather than “First do no harm,” the Hippocratic oath should more accurately be, “You can’t say we didn’t warn you.”

Describing an episode in her youth when she is unable to respond after fainting, her mother is asked if her daughter speaks English. “‘She went to Stanford,’ my mother informed him, which to an Indian parent is a more pertinent piece of information for a medic than a blood type.”

Finding the bread in the hospital uneatable, she says, “I think it was toasted outside the city somewhere and then trucked in.”

When she chooses the memoir “Wave” to reread in the hospital, a memoir about a woman who lost her parents, husband and two sons in the Sri Lankan tsunami, her husband wants to know if there were no memoirs about the holocaust or the Rwandan genocide at the library that day.

The playfulness, generosity and devotion of her husband is another moving component of the book. Reading about him, readers agree when Pawagi writes, “Love is a rock, not stone that crumbles into dust. It’s the Canadian Shield itself, granite as old as the Earth, solid and unwavering beneath my weak and unsteady feet.” Family and friends are instrumental in her cure, mobilizing to help her survive.

Her husband and mother are with her every day. She has a friend who has connections with the CBC and a radio documentary is made about her. Senator Asha Seth pleads with the Ottawa Senate to establish stem cell registration that reflects diversity among minorities. Fortunate to recover enough to have a stem cell transplant, Pawagi tells the story of finding a match. Meeting her donor after recovering is one of the moving experiences described in this memoir.

Pawagi has had a remarkable career, from CBC journalist to children’s author to lawyer and then judge, but after only one week in the hospital she writes, “I’d already forgotten…that I’d ever been anything other than a sick person. …I never used to want to be anyone other than myself, and now I constantly look at people and wish I were them.”

Yet as soon as she begins to feel better, in between hospital stays, her generosity prevails. Learning that one of her doctors is single she tries to set him up with her colleague. She suggests restaurants where they can meet. “Because,” she writes, “of course, a hematologist and a judge cannot be trusted to make a dinner reservation in downtown Toronto, where they both live, without careful supervision.”

She has poignant perceptions about her children in this memoir. She also has insights about writing. “It seems counterintuitive that writing about being sick could serve as a distraction from being sick, but it’s true.”

Manisha Pawagi deftly explores the harrowing recovery of cancer through chemotherapy, radiation and surgery, though of necessity it is a narrow subject, one with few surprises. Every reader will celebrate her recovery. I believe they, like me, will want to read another book by this intelligent, funny, generous writer, one yet unwritten and of a subject unknown, one that gives her the freedom to surprise us all.

Carole Glasser Langille is a poet and author living in Halifax. Her latest book is a short story collection called I Am What I Am Because You Are What You Are. She has given several writing workshops for women who had or are in treatment for cancer. She teaches in the Creative Writing Program at Dalhousie.