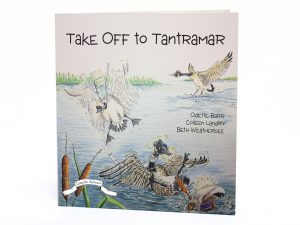 Camelia, the loveable but easily distracted heroine of Follow the Goose Butt, Camelia Airheart, has a thing for bling. So when her older brother, McCurdy, announces that he knows where Aunt Tillie got her fancy leg bracelet, Camelia can’t wait to go there to get one for herself.

McCurdy reminds her of her faulty GPS (Goose Positioning System) and she promises to follow the goose butt as they make their way to the Tantramar Wetlands. After a somewhat rocky landing (which involves crashing into a singing and dancing duck namd Drake), Camelia follows Drake’s advice for how to get her very own anklet. She then goes through a rather harrowing ordeal but is overjoyed when she ends up sporting a super shiny anklet.

Meanwhile, McCurdy suffers his own heartbreak at the Wetlands. As the siblings wing their way home, McCurdy reminds his sister of Aunt Tillie’s motto: “What happens in Tantramar, stays in Tantramar.”

This followup reunites readers with this feisty protagonist, who is somewhat challenged when it comes to directions. We are also introduced to a new and delightful character in Drake, the duck to keeps running “afowl” of Camelia’s shaky landing attempts. This rollicking rapper begs to be read aloud as he shimmies and shakes his way though an ode to crack corn.

Odette Barr’s animated and energetic illustrations magnificently capture Drake’s rapping and beautifully complement this lively portion of the text. In general the soft, pastel-coloured illustrations are perfectly suited to the story, vividly depicting the facial expressions of each character, the wetlands and the terrain over which Camelia and McCurdy fly and the bursts of action when Camelia crashes into Drake (repeatedly) and when she goes through her ordeal in the enclosure.

Once again, these authors have created a lighthearted New Brunswick adventure that will entertain young readers and listeners.