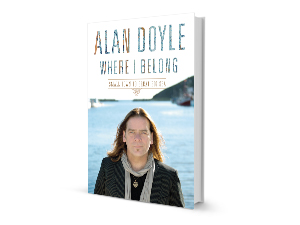 Alan Doyle is a Doyle from Petty Harbour, Newfoundland, a cod-fishing village divided into Protestant and Catholic sides 20 kilometres from St. John’s. He grew up to become the singer of Great Big Sea.

Where I Belong is the story of his youth; of cod tongue-cutting and hockey; of mostly innocent little-boy neighbourhood antics; of school and religion; of family and music. Doyle writes with the same folksy elegance as he constructs songs, full of heart and starry eyes for his little town by the sea, peppering his prose winking callbacks and characters.

Those looking for a rock memoir in the vein of The Dirt or I’m With the Band will be disappointed by the lack of salacious details about their favourite Celtic-pop band—Where I Belong contains but a smattering of Great Big Sea stories. Doyle doesn’t even buy a guitar until Chapter 10. But as any Newfoundlanderknows, there’s always more yarn to spin.

Tara Thorne is a typical Haligonian in that she has many jobs, some more paid than others. Her employers include The Coast, CBC Radio and the rock band Dance Movie.