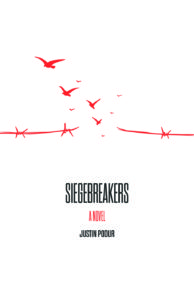 Academic, author and activist Justin Podur’s latest novel, Siegebreakers, is an international tale of war and espionage centred in the Gaza Strip.

The novel is a fictional account of Palestinian resistance fighters Nasser and Leila, whose paths become intertwined with a conscientious Israeli spy named Ari and a group of skilled American security contractors. Together, they attempt to carry out a plan to unite feuding Palestinian factions and expose Israel’s siege on Gaza to the world.

Through his meticulously researched descriptive writing, Podur evokes a vision of Gaza where inhabitants lead desperate lives among bombed-out buildings and the lurking threat of sniper fire. Stylistically, Siegebreakers moves at the relentless pace of an action-packed thriller. To punctuate the onslaught of information, Podur interlaces the narrative with one resistance fighter’s spontaneous recitations from revered Palestinian poet Mahmoud Darwish.

Much of the novel alludes to true events in the history of the ongoing Israel-Palestine conflict, but Podur takes care to alter names of certain organizations and figures, which gives the work an air of speculative fiction. In an afterword, Podur lists his sources to justify some of the more outrageous events depicted, as well as highlight and explain his artistic embellishments.

A controversial aspect of Siegebreakers is Podur’s sympathetic depiction of the Palestinian resistance movement. As shown in the afterword, “The Resistance,” as it’s called, is inspired in part by Hamas. However, Podur is no apologist for extremism. His freedom fighters are presented as a sanitized, secular version of the group regarded by many countries to be a terrorist organization. The Resistance could be seen as representing an idealized version of a pro-Palestinian force, who, unlike Hamas, do not espouse anti-Semitism, religious extremism or the targeting of civilians. Readers may find the framing of these militants as morally righteous to be irresponsible, but it’s clear that Podur intends to generate discussion.

As a work of fiction, Siegebreakers is a riveting Middle East-centred thriller that expertly dodges the predictable clichés of the genre, giving nuance and depth to its protagonists. This audacious account of the Israel-Palestine conflict is sure to provoke and entertain.