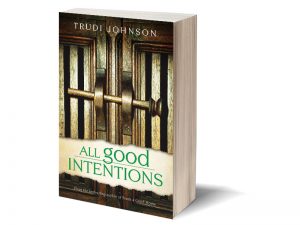 As our plane descended, the Rock came into view and took my breath away. I was coming to St. John’s to give a talk about the memoir writing class I had created at a large senior citizens’ community centre in Montreal.

The great swaths of rock and greenery seen from our plane seemed to swell with silent testimony to the highs and lows of life. I looked forward to touching down and entering into the stream of story that was ceaselessly flowing below.

It was with that same sense of wonder and excitement that I immersed myself in Trudi Johnson’s historical fiction, All Good Intentions, a book that shines a light on how family secrets can wreck havoc for generations.

Though All Good Intentions picks up on the story of the Newfoundland Sinclair family, which Johnson wrote about in her first novel, From a Good Home, it is a book that stands on its own.

In reading Johnson’s most recent book, it was delightful to come across mention of various streets including Water and Military, as well places I remember from my short trip to St. John’s. No doubt people with deep roots in the area will find much to connect with in All Good Intentions. Johnson is careful to make mention of towns, streets and landscape features that anchor her story in time and place. One particularly visual description stands out:

“Later that evening, on board the schooner bound for Falcon Cove and points north, Hannah bundled her belongings around her and hoped they would cut the chill. She focused on the steep rocks of the Narrows, the entrance to St. John’s harbour between the hills, then Freshwater Bay, until they disappeared from sight in the dusk.”

With just two deft sentences, Johnson creates an atmosphere that reflects how Hannah must have been feeling at this point in the story—a young woman who had just given birth to a baby she was unable to keep.

Yet, these forays into the feeling world of the many characters in All Good Intentions are often too brief and few throughout a novel that relies mainly on dialogue to convey the narrative. In their brevity, they remind me of fingers that merely trail on the surface of what is most definitely deep waters, and in that sense, they leave me wanting much more.

Throughout the novel, I longed for more showing and less telling. However, Johnson’s expository style is no doubt a function of her academic background. “Ideas for the story grew out of my academic research in Newfoundland legal history,” shares Johnson, who has a PhD in the island’s history. In All Good Intentions, her specialization in matrimonial law and inheritance practices is put to good use in crafting a story that unfolds as a direct result of one family member’s decision to ignore certain legalities.

I’m sure many people will find something to relate to in this story about family issues, and that is actually the great appeal of genealogical stories, whether imagined or real. In fact, positioning oneself along the story continuum of place and family is a phenomenon that has only gained in popularity with genealogy shows. And before those shows, there were memoirs, autobiographies and historical fiction such as Johnson’s books that fed our thirst for knowledge about perennial questions of identity.

The issue of identity—how we create a sense of it for ourselves in the present and how much of it is determined by those who have come before us—is one that we all grapple with, to one degree or another. Whether we go to books such as All Good Intentions for entertainment or answers that fire our imagination, or we pick up the pen ourselves, the urge to know who we are by understanding our ancestors is clearly a strong one.

All Good Intentions reminds us of how important family memories are to making sense of who we are and, perhaps more importantly, who we want to be. Ironically, though, we cannot make those crucial decisions about our destiny without knowing the truth of our family stories.

Trudi Johnson’s historical fiction inspires us to look back so that we can go forward with confidence and surety.