The Mysterious Tale of the Ferryland Visitor Evokes Wonder 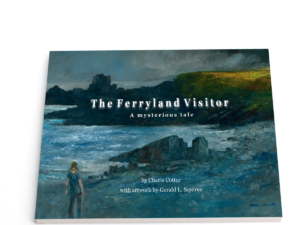 It’s nearly impossible to imagine a story that begins with a family moving into an abandoned lighthouse in the middle of nowhere turning out to be anything but a ghost story. And The Ferryland Visitor: A mysterious tale by Charis Cotter is just that. It’s a charming one.

Told through the eyes of the youngest child in the family, it takes a very quiet, everyday approach to what is essentially anything but an everyday occurrence. The result evokes wonder rather than horror. The reader becomes almost jealous of the family’s otherworldly experience – a far cry from the frisson of fear a ghost story usually elicits.

The Ferryland Visitor is based on the true story of an event which happened in the 1970s shortly after Gerald Squires, a well-known Newfoundland artist who died last year, and his wife, two small children and dog moved to the aforementioned abandoned lighthouse on the cliffs outside the small town of Ferryland. It’s October, “the spooky month” six-year-old Esther calls it, and she’s soon proved correct. One afternoon, as the fog follows the horses onto the downs, there’s a knock at the lighthouse door – the family’s very first visitor to their new home. An older gentleman and former police officer, he regales the Squires with tales of previous owners, chatting for hours over tea and whiskey. It’s only after he leaves, never to return, that the family discovers their visitor has been dead for twenty years.

What sets the book apart from other picture books is the illustrations by Gerald Squires. A combination of already-existing paintings and new sketches of Ferryland are scattered throughout the book. There are also several old photographs of the family provided by the Squires and even one of their mysterious visitor.

The photos aren’t as compelling as the paintings and sketches. They seem a little random and are quite small. However, they do add to the verisimilitude of the book. All in all, The Ferryland Visitor is a nice, gentle ghost story for younger readers.

Denise Flint is a freelance journalist who lives just outside of St. John's. She is Past President of WANL, the Writers' Alliance of Newfoundland and Labrador.