Stellar Background on Acadians, the Diaspora post-1755 and Acadie Today 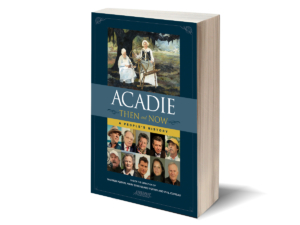 Acadie Then and Now is not just an historical text for the schoolroom – although it could be – it is also a panoply of places, people, the arts, cultural heritage and tourism wrapped up as a gift to both Acadians and non-Acadians. There are sections on research resources, a salute to Cajun cooking and regional histories – including France, St. Pierre et Miquelon, Missouri, Texas and, of course, Québec, New Brunswick, Prince Edward Island and Nova Scotia.

Frankly, the size of the book is a little overwhelming, but the chapters are bite-sized and offer stellar background on the Acadians from 1604 to 1755, the diaspora post-1755 and, most importantly, where Acadie – real or imagined – is today.

Additionally, the real and imagined Acadie is laid out for the reader through the words and hearts of some of its favourite children who are scattered throughout Canada, the US, England and France, including well-known writers, historians and artists Herménégilde Chiasson, Georges Arsenault, Zachary Richard and Diane Marshall.

As M. Chiasson points out, “there are several Acadies, but everyone agrees that they all originated in the same place.” Acadian influence in literature, music, history, visual art and film, despite early attempts to eradicate or assimilate the people, is extensive and beloved.

Even that fictional “icon” Evangeline’s story refuses to fade despite its romanticization and historical inaccuracy. J.Y. Thériault comments that Evangeline is “closely associated with the birth and formation” of the Acadian identity and, therefore, will disappear only when the Acadians have been assimilated. However, if the British generals could not get rid of the Acadians in 1755, I am certain Acadians will continue to be part of the cultural mosaic for many years to come.

Acadie Then and Now is “a people’s history,” but it is also a series of love letters to and for Acadians and their extended families. It is also an important re-telling of the history of early Atlantic North America. The book is also available in French and won a prestigious international literary award, the 2015 Prix France-Acadie Prize.