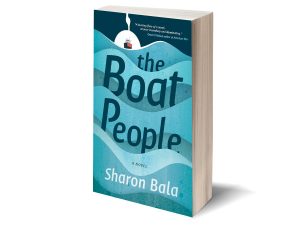 “You are loved, he told the baby each night. You are so loved.”

Sharon Bala’s debut novel, The Boat People, draws us into a Catullan odi et amo—“I hate and I love”—with 503 Sri Lankan refugees who precariously reached the shores of British Columbia in 2010.

Walking home from my local grocer here in what I make a dim shot at calling home—Toronto—I stopped at an intersection and read the crimson ink, blaring and bleeding on the cover of the Toronto Star: “A skyrocketing backlog is pushing the wait time for refugee hearings dramatically beyond the federally stipulated 60 days, with recent asylum seekers now waiting 16 months to have their claims determined.” That was today, September 21, 2017.

Sri Lanka. Canada. Norway. We’ve been here before. Michael Ondaatje’s interstitial shudders between the ‘east’ and the ‘west’—conjoined with Somerset Maugham’s geographies of the heart—this is the company in which I place Bala. She is brisk, bracing and astonishingly prescient. Nothing in this novel is free. There are no dialogical quotation marks. The heuristic effort is mercilessly placed upon the reader in a manner that is effortlessly Teiresian. Bala has done that rare thing fiction can do: forecast the future. All the more remarkable, as each day’s news pounds the ears, Bala is completely without fuss about her apparent prescience.

The Boat People will—and should, on the grounds of what Lionel Trilling called in his essay of the same name “The Moral Obligation to Be Intelligent”—linger long in the mind as an almost Graham-Greene-esque thriller about Canada’s Sri Lankan Tamil diaspora. Homeric in her narrative arc, Bala’s novel is rhetorically purposive—but poetically, softly rhetorical. One wonders whether this book could, like the late Derek Walcott’s Omeros, have been composed in verse after all. Read aloud, a poet cannot but hear Bala’s tri-colon crescendos interspersed with now melodious, now dissonant slant rhymes.

Mahindan’s arrival in British Columbia begets a new departure, as does, of course, Odysseus’ return to Ithaca in the Homeric Odyssey. Like Odysseus, the subsequent journey is not nautical but terrestrial. Like Odysseus, Mahindan has a “fighter from afar”—a not implausible etymology for “Telemachus”—in the form of his son, Sellian. Indeed, “arriving was just the beginning,” as Bala tells us. Mahindan’s “optimism dimmed at the prospect of another journey ahead.” Odysseus, upon returning home to Ithaca at the putative epic end of the Odyssey, must set out again—not outland by sea, but inland. So refined is Bala’s prosopography that one cannot but pause at the city whence Mahindan has arrived toward another (Homeric) journey: Kilinochchi: I cannot but hear the words kill and on in that city’s name.

In Canada, it is “left-wingers who let feelings [sic] undermine common sense,” according to Bala’s villainous Fred Blair, an MP whose CV ostensibly consists in border patrol and not much else. An imperious, flat-track bully, Blair’s character is perhaps this novel’s only flaw: his every decision is painfully predictable.

A newspaper calls the boat—“sensationally”—some semblance of a “ship of dreams.” We are accustomed, these days, to so much blustering against DACA and Dreamers, and demented talk of walls. And so the words of Bala’s Fred Blair: “those terrorists dream big.”

Bala is ahead by a century in the cricket score of politically powerful contemporary fiction. She has seen rhetorically post-Brexit, post-Trump, possibly post-NAFTA, bombast from a country miles away.

The heart of the matter, to return to Graham Greene (and to cricket), is the moral equivalency whereby Bala bowls us leg before wicket. We are still reeling from Norway’s, and others’ stupid adventures in Sri Lanka. We are still warbling in the wake of post-colonial chaos that has therefrom obtained. But, Canadians? “They’re no better than the Sinhalese.” Moral equivalency, again.

Sure, “Ganesha is okay” among the metaphysically migrated bric-a-brac brought on The Boat. Why Ganesha, though?

“Just don’t think about it.” But what then?

This is what we migrants will always wonder. What, then, when we let it go?

US Dhuga is a writer, lecturer and critic and is the founder, publisher and editor of The Battersea Review. His latest book is a collection of poems entitled The Sight of a Goose Going Barefoot.