It is hard to believe one might maintain hope in a prisoner-of-war camp located thousands of miles from home, especially as health declines and the pages of the calendar turn with no end in sight. But it is courage, hope and resilience that shine through in The Endless Battle: The Fall of Hong Kong and Canadian POWs in Imperial Japan. The book draws on the personal papers of Andrew “Ando” Flanagan to recount the experience of one New Brunswick soldier who became a POW after the fall of Hong Kong in 1941. 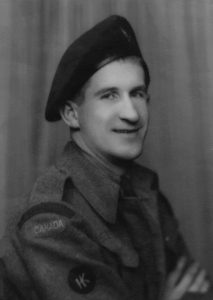 Written by Flanagan’s son, Andy Flanagan, The Endless Battle illustrates in vivid detail the brutal three-and-a-half years Flanagan suffered in Japanese prisoner-of-war camps. The use of Flanagan Sr.’s personal papers, and his subsequent reflections on his own words in conversations with the author in the years after he returned home, offer insight into the enduring impact his traumatic experience had on he and his family. While he suffered in the POW camp, his family waited at home with little information regarding his welfare. Fortunately, he wrote home on occasion and sent one radio broadcast over Toyko Radio International. In his letters, he hesitated to reveal the true nature of his physical injuries from the backbreaking labour, regular beatings and barely substance-level rice rations.

After the war, the physical effects and mental trauma endured. He admitted, “I still woke up at night screaming in Nip, fighting a battle without end. My family told me I was worse when I drank whisky. Drinking beer helped me fall asleep. Whiskey made me fightable.”

The man Ando Flanagan was shines through in his own words. He learned Japanese so he could speak with his guards and advocate for his fellow prisoners. He was a man

from a small town in New Brunswick and he mused regularly about being homesick. His casual way of writing allows the reader to visualize all things–from the worst beatings he endured to returning home and falling in love with his wife-to-be, Clara. The brutal reality of the prisoner-of-war camp shines through, as does the humanity he attempted to preserve as he wrote about his fellow prisoners of war and his family back home.

The book is volume 24 in the Gregg Centre for the Study of War and Society’s New Brunswick Military Heritage Project series that aims to provide the New Brunswick voice in Canada’s wartime experiences. The Endless Battle is the second book in the series recounting the experiences of a New Brunswicker who endured the harsh conditions in a Japanese prisoner-of-war camp. In 2009, Jonathan Vance published Bamboo Cage, which uses the personal diaries of Flight Officer Robert Wyse to highlight his experience in a camp on the Indonesian island of Java. In both cases, the books capitalize on a rich document set that allows the reader to hear about the brutal experience straight from the men who lived it. Some of Flanagan’s stories are so extreme as to seem unbelievable. But the use of his own words and his own personality make his experience real.

Both Flanagan and Wyse kept diaries that revealed the harsh conditions and suffering that POWs endured, as well as a record of events from before they were taken prisoner. This is even more important in Flanagan’s case as war diaries and message logs were ordered destroyed before Hong Kong was surrendered. One of Ando’s prized possessions was the short history of the events of the Battle for Hong Kong that he hid in his boot so he could keep it safe from the eyes of prison guards.

Although important for the historical record, there was great risk to maintaining personal papers and difficulty acquiring paper and tools to write. Prison guards regularly inspected Flanagan’s diary and blacked out sections, ripped them out or beat him for what he wrote. Wyse, on the other hand had to keep his diary a secret and buried it at the camp so it would not be discovered. He only retrieved it after the war.

Keeping a diary of his experience was a small act of resistance for Flanagan. He recorded many of the inhumane acts he and his fellow POWs suffered at the hands of their prison guards as well as the small acts of kindness by Flanagan and others to preserve their own humanity. In this way, his writing became an act of resilience and hope in a very dark time. Risking his life in this way also provides this rich account of one New Brunswicker’s experience as a POW in Imperial Japan.

Cindy Brown teaches history at the University of New Brunswick and is a faculty member at the Gregg Centre for the Study of War and Society. Her current research considers how war affects non-combatant civilians with a particular focus on the Great War and the Second World War.