Powered by Love A Book to Renew Faith in Humanity 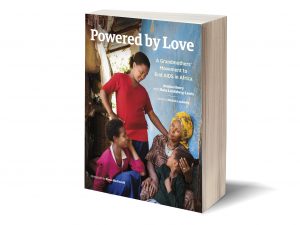 It was Alexis MacDonald’s photographs of African women that drew me in. My senses are numb after years of seeing photographs depicting poverty, sickness and starvation in sub-Saharan Africa, but instead the faces of these women express hope, joy and purpose. There are also photographs of Canadian women bonding with them and although they’re seniors there’s something youthful about them—they positively glow.

So, who are these women? And what’s going on here?

In a word it is “love.” As Stephen Lewis writes, “A cornucopia of sisterly love.”

Upon his return to Toronto following six years as the UN Special Envoy for HIV & AIDS in Africa, Lewis couldn’t stop thinking about the heart-wrenching stories of grandmothers who’d lost their adult children to AIDS and were struggling to raise their grandchildren, many of whom were HIV positive.

In 2006 he and his daughter Ilana Landsberg-Lewis, a human rights lawyer, co-founded Grandmothers to Grandmothers, a grassroots organization through which Canadian grandmothers support their African counterparts. At first they were dedicated to helping women start small businesses and become self-sufficient so they could provide for their grandchildren. But over the years the organization has evolved and shifted focus as African women are empowered to demand their rights to healthcare, pensions, protection from violence, political representation, food security and shelter—all basic human rights.

Author Joanna Henry had been part of a disaster relief team in Africa but was disillusioned with her job, feeling that instead of serving the people she was serving the interests of Western nations. In searching for a better way, she discovered and joined the “feminist, ethical, founded-on-equity” work of the Stephen Lewis Foundation, which led her to write her first book.

Beginning in Zimbabwe in October 2012, Henry travelled to eight countries, interviewing hundreds of grandmothers and recording their stories, then spent the next four years communicating back and forth with them and their support organizations. The process was repeated across Canada with hundreds more grandmothers from more than 50 groups.

What has emerged is a narrative greater than the sum of its parts, one that champions the birth of a social revolution through the voices of the women who lived it.

If you’re looking for a book that renews your faith in humanity, this is it.