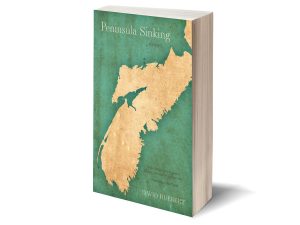 Drawing from a deep well of momentum, David Huebert lands his first collection of short stories Peninsula Sinking and solidifies his reputation as one of Canada’s most promising literary talents. Launched by the success of his poetry collection We Are No Longer the Smart Kids in Class, David Huebert’s first full-length prose effort undulates between the fierce, ubiquitous magnetism of Nova Scotian home life and the surprisingly moving power of the mundane. In Peninsula Sinking, Huebert’s characters walk into disjointed moments of memory and solitude finding ephemeral but meaningful clarity.

In these stories, Huebert, as deftly as any writer ever has, cuts the thinnest slivers of consciousness. His finest moments are quick snatches of a personal archive coalescing into single contemporaneous thoughts. Huebert experiments with how the loudest part of our interiority–the part that sounds like words and voice–is a crust on the yawning and often disturbing bog of memory. These explorations are not Proust’s madeleines. They come at us jarringly and unwanted in the form of dog erections, botched self-botoxing and Perrier rings on the coffee table. Huebert skewers cross sections of grief, shame and desire, puts focus on disconnection and threads together the ineffable moments in a singular patchwork.

Each of the eight stories in Peninsula Sinking proposes a familiar animal to accompany epiphany. In “Maxi,” a prison guard commits suicide by boa constrictor in a silent intimacy reserved for the best French New Wave. The 2016 CBC Short Story Prize winning “Enigma” descends into the mutual oblivion of a woman and her euthanized horse. “Drift,” the collection’s simplest and most gripping achievement, is an unadorned picture of one story from the 1992 Westray Mine disaster that begins with a pork tenderloin as its “recently growing, twitching” analogue. Elsewhere, dreams of neutered dogs and distant whale songs reverberate in the understated everyday of parents, siblings and lovers. Huebert’s animals work well: not just clever mirrors held up to his characters’ raging animality, but as new and sparklingly clear lenses with which to sketch their souls. With a tendency toward language that cascades rather than propels, Peninsula Sinking is a wonderful high point in a new and bright career.