Our brush with fame: with apologies to Alistair MacLeod 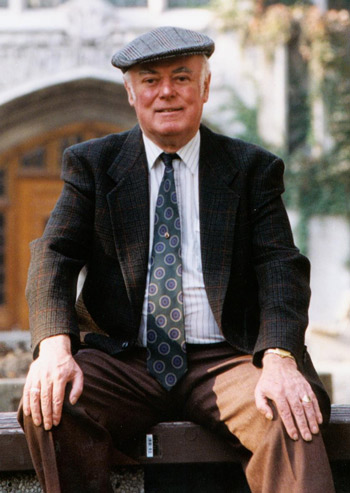 Like many people who live and work in the world of books, I was taken aback when I learned of Alistair MacLeodâ€™s death on Sunday, April 20. The news seemed to come out of the blue, and, as people do, many in my social circle began posting their own personal recollections of the man. Their stories made me think back to my own fleeting connection with the beloved author.

I had spoken to Alistair on the phone in early December of last year. He had written a lovely essay for our summer reading publication, and Iâ€™d called to ask if we could have his permission to republish it on our website.

He was gracious in his immediate response â€” the answer, of course, was yes â€” but immediately thereafter, he took me to task.

There had been some errors in the published version of his essay â€” unpardonable errors, he was absolutely correct in that â€” and he felt they reflected poorly on him. He patiently described them to me over the phone, then sat down and wrote me a letter to more clearly make his point.

In my own defence, I had not been part of the team that had worked on the publication, so I was able to accept his criticisms without feeling any personal sting, although I was truly apologetic on behalf of my colleagues. And in my colleaguesâ€™ defence, well â€” Alistairâ€™s original essay had been submitted the way he always submitted things â€” in the form of a hand-written letter, delivered by mail. Some of the errors had arisen out of a misinterpretation of his handwriting, and some out of simple typing mistakes.

That said, I canâ€™t stress enough that such errors are entirely unacceptable.

When Alistairâ€™s letter of correction arrived, I read it with great chagrin.

â€œThe most annoying error regards Ernest Buckler,â€ he scrawled by hand. â€œErnest Buckler is perhaps the greatest Maritime novelist. â€¦To see myself quoted as not knowing how to spell his name is no fun.â€ (Our piece had, unforgivably, spelled Buckler â€œBuckley.â€)

â€œCountless people have pointed this out to me,â€ he wrote. â€œWe knowÂ youÂ know how to spell â€˜Bucklerâ€™ they say. It must be those stupid people at Atlantic Publishers. I do not wish Atlantic Publishers to be â€˜stupidâ€™ but neither do I wish to appear that way. Perhaps you might point this out to someone.â€

Ouch. Consider it pointed out, Alistair, and please accept our humblest apologies.

Below, please enjoy the corrected version of Alistairâ€™s delightful essay from the 2013 Atlantic Summer Reading Guide. 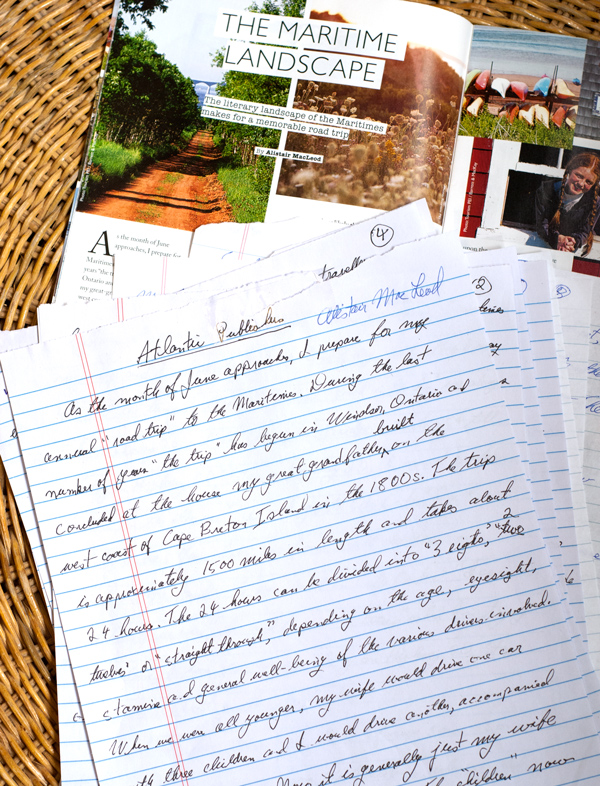 As the month of June approaches, I prepare for my annual â€œroad tripâ€ to the Maritimes. During the last number of years â€œthe tripâ€ has begun in Windsor, Ont and concluded at the house my great-grandfather built on the west coast of Cape Breton Island in the 1800s. When we were all younger, my wife would drive one car with three children and I would drive another, accompanied by three other children. Now it is generally just my wife and myself in a single automobile.

We remember landscape, very often, by events that befell us within that particular landscape. On two successive years, while attempting various â€œshortcuts,â€ we had car trouble at exactly the same spot between Youngâ€™s Cove and Coleâ€™s Island, NB. The first time, the local garage owner took us all to his cottage on Grand Lake while he did the necessary repairs. After the second event, we decided to â€œnever againâ€ take that particular shortcut and we have been true to our decision. But still, as I now travel on the super deluxe New Brunswick highway, I am aware of Coleâ€™s Island and Youngâ€™s Cove. I see the signs pointing to their location and remember. They are not â€œon the main road,â€ as they never were, and it is unlikely that I will ever visit them again. But they are embedded in my memory. They are in my memory because of my experiences.

So it is with literature. Much of the literature of the Maritimes is old and historical. It dates back to the writings of Champlain as he describes his first mistakes and it perseveres today in the offerings of contemporary writers. Roads have changed but the landscape is essentially the same. Whatever route we take through New Brunswick, we are aware of the Confederation poets, and of places such as Fredericton and Tantramar. We are aware of Alden Nowlan in Hartland and of David Adams Richards as he presents to us lives lived along the Miramichi. When we cross the border into Nova Scotia, another vista opens up along with various possibilities depending upon the roads chosen. Should we choose to follow along Northumberland Strait we can almost look across and see Prince Edward Island. Should we turn towards Halifax it is still possible to view remnants of the Halifax Explosion, described in Hugh MacLennanâ€™sÂ Barometer RisingÂ or stand among the remnants of George Elliott Clarkeâ€™s Africville.

The Maritimes has produced, and continues to produce, great art. Those who drive the weary highways of the world will find, in the Maritimes, not only beautiful scenery but art of the highest quality. Everyone should participate. It is good for the human soul and will make you a better person. The drive is worth it.