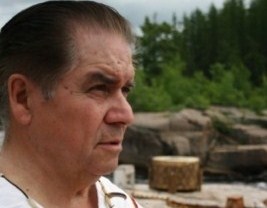 Gilbert Sewell of Pabineau First Nation (Oinpegitjoig L’Noeigati), a Mi’kmaw Storyteller, has been surrounded by story as long as he can remember

Over the years, oral storyteller Gilbert Sewell has achieved more than most people could ever imagine doing in a lifetime. He’s met with Pope John Paul, Lady Diana and the Consul of France. He’s received the Queen’s Jubilee Medal, the New Brunswick Human Rights Award, the New Brunswick Eco Award and the Canadian Merit Award. And he has had his work featured by media outlets like the CBC, Aboriginal Peoples Television Network and the Discovery Channel.

Sewell has accomplished all this through hard work and a lifelong dedication to sharing his Mi’kmaq heritage. An elder from Pabineau First Nation in New Brunswick, Sewell is described as an oral historian, a folklorist and a storyteller. He’s written columns for New Brunswick newspapers, worked as a guide and currently teaches Mi’kmaw. But although Sewell does many things, one goal ties all of this together: he wants to make sure stories and knowledge are passed down and available to future generations.

Storytelling has been a part of Sewell’s life for as long as he can remember. For him, stories just naturally weave their way through his personal history. But one storyteller from Sewell’s childhood stands out in his memory.

“We had a storyteller here a long time ago,” says Sewell. “When he would come here my mother would say, ‘Oh, how is my cousin who got married doing?’ And he’d say well, she’s got a baby boy now,’ and then he’d go to Metepenagiag, and tell them the stories of what we’re doing. And then when he travelled back through here, he’d pick up stories about us and take them up to Restigouche, and then he’d carry on to Maine. Long ago in our community, storytellers were well looked after. They’d give you a place to stay, they’d feed you, and everything else. That’s how we carried oral history and tradition. That’s how I learned the history of my people.”

He can also trace a lot of his early stories back to when he was six or seven and he was spending a lot of time working in the forest with his grandfather. Most of these were based on legends and folklore, and his favourite stories were always the spookiest ones.

“We had one about skite’kmuj,” says Sewell. “Do you ever walk at night and feel like someone is following you? Well my grandfather says that’s skite’kmuj. Skite’kmuj is a spirit that emanates from the body and travels. Sometimes the person who’s died wants to get revenge on you because he didn’t get along with you during his lifetime. So he’ll follow you, and then pick a fight with you. My grandfather always said if you weren’t scared of him while he was living, you’re not going to be scared of him when he’s dead. So what you do is you jump aside and say, ‘siawa’sit!’ or ‘keep going!’ I’ve got two or three stories where that happened to me, and they never bothered me after that.”

He also loves telling stories about Wiklatmu’j, the rock spirits also known as the Little People.

“We used to hear them singing in the hills a long time ago, and that’s of course one of the stories my grandfather told me. The little Mi’kmaq would be singing songs in our language. And sometimes you’d see these fireballs in the road like, and they’d say those were the little people. Sometimes we’d see them flying through the air, right over the house and into the woods,” says Sewell.

When he was older, he decided to pursue linguistics, and travelled through 30 states, 9 provinces and Mexico, studying folklore and language. He went to museums and visited with Elders in different Indigenous communities. He learned so much that when he came back home he felt like he’d collected too much knowledge. So he decided to focus in on Mi’kmaw.

For Sewell, stories are a way to share information, to pass on messages, to report on what is happening in the world now and explore the things that have happened in the past, so that we can apply those lessons to our present and our future. According to Sewell, a lot of the old knowledge has already been lost, but we continue to need stories so that we can preserve what’s left. And there are plenty of people who still want to hear the stories he has to share.

“I’m 77 and I’m still increasing my knowledge. Because if you just sit, your brain sort of becomes redundant. It goes over and over the same things. I like to get out there and do things.”