New London: The Lost Dream Has Been Selected PEI Publication of the Year

Congratulations to John Cousins, author of New London: The Lost Dream,which was selected PEI’s Publication of the Year (2016) at the recent PEI Museum and Heritage Foundation awards held in Charlottetown. 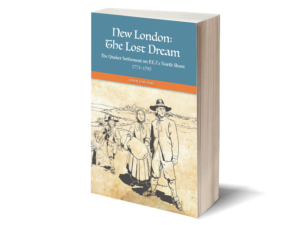 New London: The Lost Dream was published by Island Studies Press in summer of 2016. Its story is the rise and fall of one of PEI’s earliest settlements: the Quaker village on PEI’s North Shore which survived – and occasionally thrived – between 1773 and 1795.

Atlantic Books Today selected this same book in our recent Winter Issue No. 82 as a history book we’d read twice. Here’s how we described it then:

This is a beguiling account of the little known attempt, for two decades in the late 18th century, by a wealthy English Quaker named Robert Clark and his followers, to create a commercial outport, a gateway into the new world, on the north shore of what is now PEI.

The story is researched and engagingly told by historian, folklorist and descendent of two of those hundred settlers, John Cousins, an expert on the Island’s history.

Cousins’ story is not only astute and informative, it also sheds light on the fact that the road to the modern world is littered with failed attempts at urbanization, and folks of great ambition and capabilities who were either unlucky or made the wrong choices.