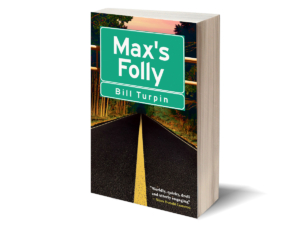 Max, to his own mind, is two separate people. At present he is a resident of a Halifax nursing home, a widower slowly succumbing to memory loss. Yet Max also conceives of himself as “a full-time time traveller of sorts,” blessed with the ability to jump through time (although lacking control over when and where he ends up). Emboldened by this, Max resolves to flee the institution and “find the Wife in the right place and the right time—a snug spot along that river’s bank—and stay there.”

What follows is Max’s Folly, Bill Turpin’s slightly unhinged bildungsroman that nimbly leaps back and forth over Max’s timeline with a gratifying verve. As the increasingly confused Max plots his physical escape (aided by notes from his time-travelling self), his time-jumps take him from dodging bullets in Latin America to running a Halifax newspaper to becoming a press agent for a communications company.

Turpin’s past career mirror’s Max’s own, and it shows; he captures the insular, backstabbing nature of a newspaper with confidence and brio, and his many scenes of Max’s editorial skirmishes are the novel’s true delight. Turpin is also a natural storyteller, with a flair for offbeat characters, comic dialogue and droll situations that at times allows Max’s Folly to resemble the exploits of another famed time traveller, Kurt Vonnegut’s Billy Pilgrim (Slaughterhouse-Five).

Yet as entertaining as it is, the whole is somewhat less than the sum of its parts. The time-travelling scenario is ostensibly clever, but lacks for any satisfying resolution. Whether Max is time-travelling, or actually yielding to dementia, the concept never integrates fully, feeling like a loose framing device brought in to draw the novel’s disparate elements together. Max’s Folly is nowhere near a folly, but like Max himself, it’s not quite the success it wants to be.