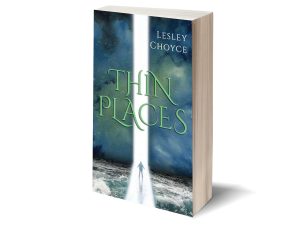 Declan Lynch is a sixteen-year-old boy who has never quite fit in. He’s always felt like he was born in the wrong century. He’s had more imaginary friends–voices in his head–than real ones. As he grows up, these voices transition into his own voice. One day the voice in his head becomes that of a girl, who searched long and hard to find him, using all of her energy to build a bridge of connection to reach him. A girl with a centuries-old voice, someone with whom he finally feels a connection.

Declan begins to have visions of this girl, named Rebecca. He ends up falling for her, though he’s never met her and isn’t sure she actually exists. She shows him visions of places he’s never been and people he’s never met. He sets out on a quest to find them, in hopes of finding her. He winds up in his ancestral home of County Sligo, Ireland, staying with his Uncle Seamus.

Thin Place, written in verse and intended for 12-15-year-old readers, is a blend of fantasy and contemporary realism, drawing on Celtic myths and lore. Author Lesley Choyce explains in a “Dear Reader” letter that the idea came to him while visiting Ireland, in a place called Knocknarea (where Declan visits), known as a “thin place,” a special location where some of the Irish say there is only a thin space between the spirit world and the physical world.

While Declan has always believed he is the one lost in a world where he doesn’t belong, looking for a guide and needing help, Rebecca shows him he is the one who needs to do the helping. She is beyond lonely and needs to connect with someone more than ever. It’s a compelling and suspenseful story, as both Declan and the reader have to wait to find out what happens, to find out who Rebecca is and what she needs help with.

The spacing and placement of words on the page allows the reader room to envision what’s happening and join this fictional world. The style is simple and really captures Declan’s sixteen-year-old voice.

This is a very grown-up young adult book with some deep concepts. One of Declan’s only friends, another loner at school, makes a couple of jokes about Declan’s mental health and at times it feels like this may be the direction the story is headed. But readers embracing elements of fantasy, linking Ireland’s ancient lore, history, myth and contemporary life, will enjoy a magical journey and endure a truly tragic love story.