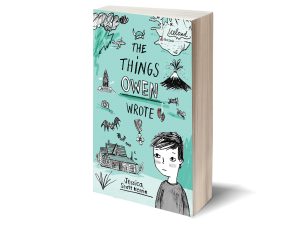 Owen Sharpe is surprised to come home and find his grandfather, Neville, surrounded by boxes, particularly when he learns that they contain the life’s work of his good friend Gunnar, who died a few years previously. Gunnar’s wife has asked Neville to sort through Gunnar’s papers and determine which ones should be sent to the archive in northern Iceland. Gunnar had been a translator of Icelandic poems and stories.

Neville mistakenly sends one of Owen’s notebooks instead. The notebook contains a terrible secret, one that Owen is desperate to keep from his grandfather.

Owen manages to convince Neville that the two of them ought to hop on a plane and head to Iceland to deliver the proper notebook to the archives and get Owen’s back. They get to Iceland and have some very memorable experiences, but Owen can’t ignore the fact that Neville’s behaviour has become increasingly erratic.

There are several things that make this latest offering from Jessica Scott Kerrin stand out. The unique and beautifully depicted setting is one of those things. Although Owen and his grandfather are only in Iceland for a couple of days, the country, its history, culture and people, are vividly brought to life. As a budding photographer, Owen tries to capture the magnificent landscape through his camera lense and in that way, the author cleverly brings readers into the unique vistas they encounter.

The relationship between Owen and his grandfather is also genuine and touching, as is the way that the Red Deer Readers Book Club ladies look out for Neville. Kerrin also handles Neville’s frequent bouts of confusion and Owen’s mounting concern for his grandfather with sensitivity and compassion.

There is an understated quality to the prose that serves to heighten its poignancy. A quietly powerful gem, this novel will find a special place in readers’ hearts.