“I Try To Be Musically Honest”

Governor-General Award-nominated poet Phil Hall is the University of New Brunswick’s current Writer-in-Residence, until May of this year. He is located in the English Department in Fredericton. His work includes conducting readings around the province with Acadian poet Rose Deprés, mentoring students with their writing, visiting classes and meeting with the general writing community. He also has a showing of his visual collages at the Harriet Irving Library until Feb 1. Hall graciously agreed to chat with Atlantic Books Today about his experience to date: 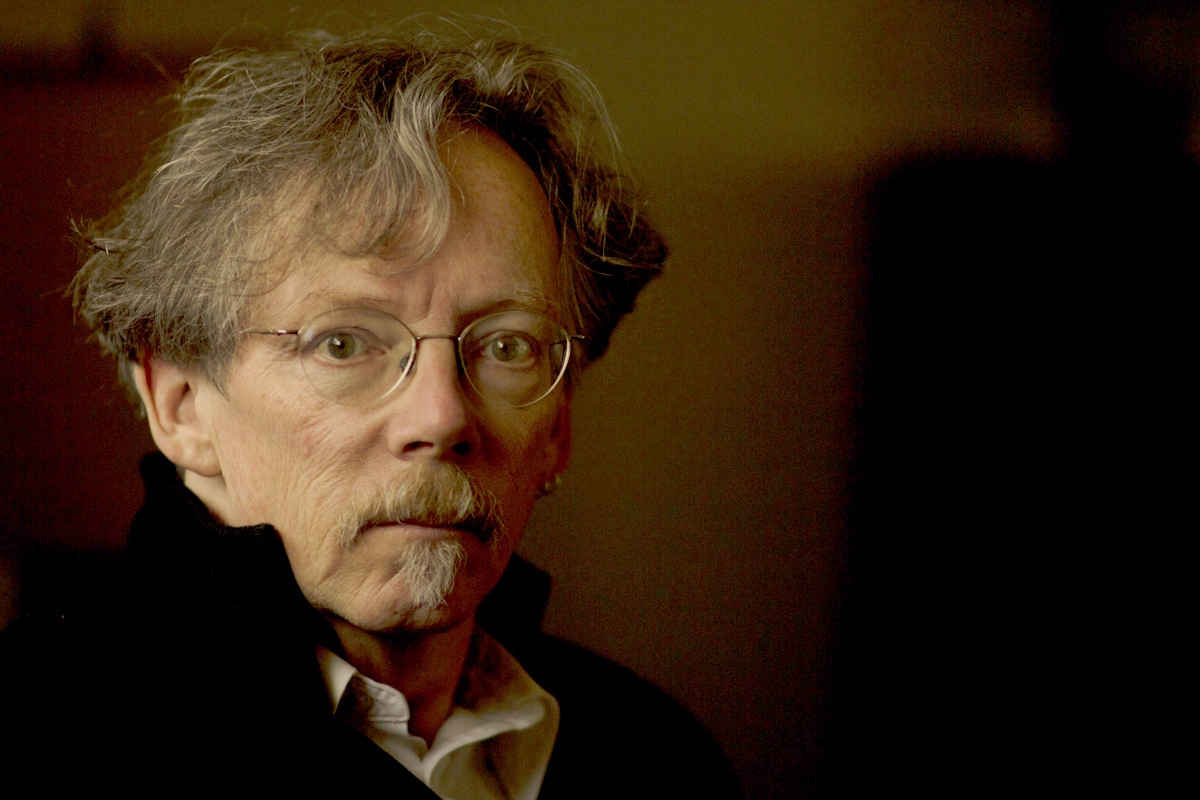 Atlantic Books Today: You’ve been at UNB since Sept; what are your impressions to date and what do you think you’ll miss most when you leave?

Phil Hall: My native country is Ontario, so it is an adventure to get to know this other settlement and its writing ways, a bit further from centre, with different gods.

I have met some terrific writers at the university, and in the larger community. That UNB is one of the only two universities in Canada now to offer a Phd program in Writing (Calgary is the other) makes the UNB English Dept a vibrant place to be.

I have wanted to meet M Travis Lane for years; now I have. And of course, Herménégilde Chiasson is one of my favourite Canadian poets—in November, I saw his art retrospective at the Beaverbrook Gallery.

In the Harriet Irving Library, I can sit under the big painting of Alden Nowlan, look down and across the river, and read the manuscripts that have been sent to me.

Every province thinks it knows the true meaning of what rural is, but New Brunswick has a special claim: no metropolis, fewer people. All this silence breeds deep listening, raucous stories, poems of place. There’s a strong pull to all that.

I have been welcomed quickly and easily here.

ABT: You’ve been doing readings around New Brunswick with the Acadian poet Rose Deprés, who translated your book Killdeer into French. What have you learned from Rose?

PH: Rose is a terrific poet and translator. She has helped me see my own book newly, as good translators are able to. She has also led me to the best second-hand shops!

Reading with her has been one of the best things about being here. Alternating French and English in our readings from Killdeer/Le pluvier kildir—we have been able to offer audiences that wider scope our literature should have. We need more braiding of languages—the two official ones, & the Indigenous ones, as well as all the others that are here.

Rose has been my guide in the field. She and I will be going to the Northrop Frye Festival in the spring too. I’d be nervous to do it without her.

ABT: You’ve also been visiting classes and meeting with students about their own writing. What have you noticed about these writers in training? Do you get a sense of anything different about New Brunswick in terms of poetic interests?

PH: The students, of course, are from all over Canada. There are graduate students from the States as well. They all bring the interests that are current everywhere now: gender & transgender issues, racism & violence against women, global weather-shifts, borders and immigration.

I have also met students from French homes in the north of the province. They have been grateful to hear French read (by Rose) at some of our poetry readings—because they miss their language, miss home.

I’d say there is a strong base of provincial literary pride here. This includes a stronger belief in writing about the Poor than I notice in Ontario now—a belief in not having to be educated before you speak up or sing your song.

But what do I know—I’m just visiting. (Though I believe in the same things too.)

ABT: You’ve been described as a terroir-ist; how do you find being transplanted (and in fact translated) then? Is the new locale useful to you going forward in your work? Is it just more grist for the mill or does it offer any fresh, perhaps unexpected, perspectives?

PH: Yes, there is a certain slope of homestead in Ontario where the gooseberry wine of my poems can be traced to.

I’m from Bobcaygeon. Like the Tragically Hip song. But that was long ago, and it sounds like ad-copy now. Where I grew up…

In truth, I have lost or discarded the map to where that slope is, and so my writing becomes more wayward, more un-localized all the time. 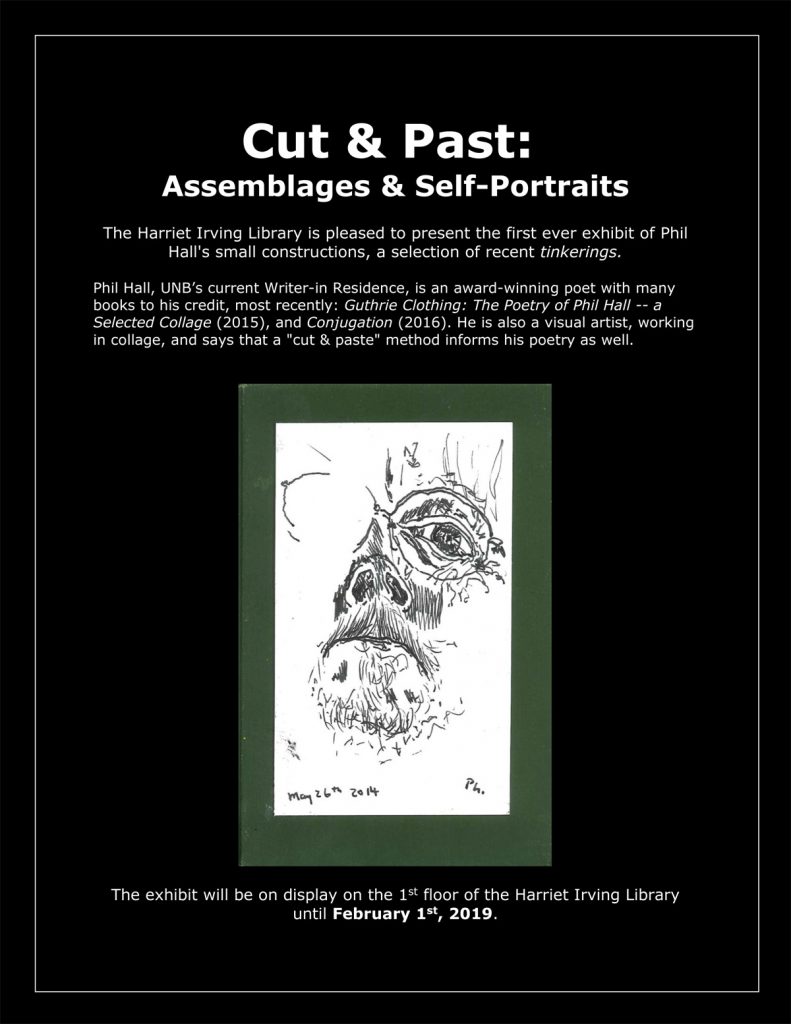 While in Fredericton this winter, I’ve been writing a long travel poem called “Prodigal.”

It mentions Guyana—where I was last winter—but also The Happy Baker, where I buy sourdough bread each week.

ABT: Reading your poetry I get a sense of process as product (if you’ll forgive that term, which sounds like an economist wrote it), by which I mean your techniques as you work through the English language are on full display, to fantastic effect. I particularly felt this reading “The Rogue Wave” in Conjugation. What is the significance of writing that way—in a sense exposing yourself emotionally as well as poetically—for you?

PH: My practise is to invite words over time to share and chronicle my living processes, as opposed to making set pieces that are products in that they would strive for perfection and publication.

The long sequence and collage—forms I mostly work in—are anti-perfection. I seek words to embellish my flaws.

I am trying to change the nature of revision—so that instead of chiselling away at a first draft to sculpt it, I might instead invite more into it, and keep adding, toward cornucopia.

That’s why I started writing essay-poems: so the kitchen sink would know it was welcome.

I expose myself in my poems because I trust the reader to know what is dishonest and what isn’t.

When I first write something it is usually occasional and personal, but if I keep writing outward, I will come to an underlying rage, or an underlying joy that is impersonal—and that is shareable.

That’s why I write: to share music and form, rage and joy.