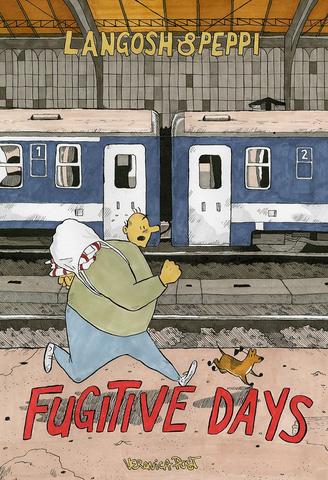 The book in question, Langosh and Peppi: Fugitive Days, was published by Conundrum Press in May of last year. The story follows a man named Langosh and his dog Peppi as they travel through Hungary, Slovenia and Bosnia.

“It’s a fictionalized autobiography,” Post says. “It’s drawing on elements from life, so the characters are fictional and elements of the story I’ve elaborated on or created from my imagination.”

Langosh lives in Europe illegally, running from legal issues he faced in his home country, Canada. During his travels, he meets a colourful cast of characters and explores some of the area’s rich and complicated history.

The graphic novel took a considerable amount of time and research. Post wrote most of it during her own time in Hungary.

“I kept a diary in the form of a graphic novel, so a lot of it was already done,” she says. “I witnessed a whole bunch of interesting things that Langosh goes through, and I explored the areas he explored. It is kind of like taking people with me on my adventures but in more of a fictionalized way.”

Langosh and Peppi: Fugitive Days touches on a variety of themes in the book, including identity, culture and privilege. Post hopes readers will walk away from the book with a deeper understanding of who they are and a deeper respect for those around them.

“We all live with layered amounts of privileges and different experiences, and I hope the book helps people reflect on that in a more personal way,” she says. “Maybe it would be good for people to get to know people from different background and understand their experience before making judgements or before assuming everyone has the same choices as they have.”

Post says a sequel to the graphic novel is currently underway.

Caitlyn Mearns is a college student and writer on the east coast of Canada. She loves books, folklore, horror films and the east coast’s vibrant craft beer (and cider!) scene. Caitlyn currently lives in Halifax, Nova Scotia with her husband and their two cats, Harley and Hazel.