Halifax Explosion by the Book: A Walking Tour

In remembrance of the Halifax Explosion let us guide you from bookshop to bookshop on the streets of Halifax in search of stories of the disaster, one of the largest man-made explosions of all time

The Halifax Explosion occurred on December 6, 1917, claiming nearly 2,000 lives; thousands more were injured or instantly became homeless. Although downtown Halifax did not experience the level of tragedy as north end Halifax and a section of north Dartmouth, it was a flurry of activity in the hours and days following the explosion.

The Victoria General Hospital was so busy that surrounding sidewalks were crowded with patients on stretchers. Relief hospitals and temporary medical dressing stations were set up throughout the core. Pine coffins were stacked around the corner of Argyle and George Streets outside Snow & Company Undertaker, which, in the aftermath, conducted 30 to 40 funerals per day.

Today, a stroll through some of downtown Halifax’s bookshops can find a myriad of stories and retellings of the near century-old disaster. 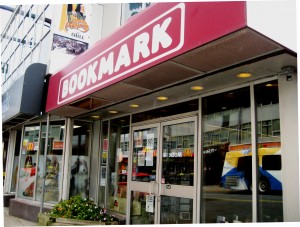 We start at Bookmark II located at 5686 Spring Garden Road (the independent booksellers also have a location in Charlottetown). Of the shop’s plentiful selection of Halifax Explosion books, some works of fiction include:

Bookmark II also has a generous collection of non-fiction Halifax Explosion books including:

One popular example is Who’s A Scaredy Cat! A story of the Halifax Explosion (Nimbus Publishing, 2014) written by Joan Payzant and illustrated by Marijke Simons. This story of hope enjoyed by all ages, originally published in 1992, features Flossie who takes delight in ridiculing Isobel. In the aftermath of the explosion, Isobel shows Flossie how brave she really is and the two become friends.

Continuing down to the foot of Spring Garden Road to Maritime Centre (1505 Barrington Street), you’ll find Dustjacket Books in the building’s basement. The purveyor of “used and rare books” has a large local and regional section, which includes older editions of some Halifax Explosion-themed books and an impressive collection of works by Order of Canada recipient, Nova Scotia’s beloved Thomas Head Raddall.

Raddall, a young teen in 1917, was actually inside Chebucto School when the Halifax Explosion occurred. Later that day he helped some soldiers as they prepared the school to be a temporary morgue. 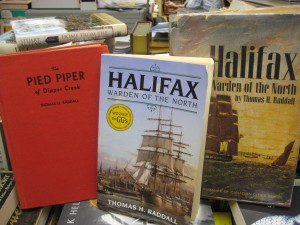 Two of Raddall’s works, “A Winter’s Tale” in The pied piper of Dipper creek: and other tales and In My Time: A Memoir include sections that intimately reveal his experience with the tragedy.  While both are out of print—although you may find them at some used book shops and libraries—Raddall’s Governor General Award-winning tome Halifax, Warden of the North is still published by Nimbus.

We head down to the waterfront and veer left for our final stop: The Maritime Museum of the Atlantic (1675 Lower Water Street). Among the exhibits is a permanent one on the Halifax Explosion—author Ami McKay (The Birth House, The Virgin Cure) shares an excellent description of the exhibit on her website. Encased in glass at the exhibit’s entrance is The Remembrance Book which lists the names of 1,951 people who died from the explosion. You can view a detailed, online version of the book on the Nova Scotia Archives website.

Inside the museum’s gift shop a collection of Halifax Explosion books are displayed. At the top is Explosion in Halifax Harbour: The illustrated account of a disaster that shook the world (Formac Publishing, 2004) by David B. Flemming. Former director of the museum, Flemming’s parents had survived the explosion. Explosion in Halifax Harbour verbally and visually recounts the timeline leading up to, during and after the explosion. According to Formac, the book includes “the most extensive collection of images—many in colour—available in print.”

Now that we’ve wrapped up our walking tour of Halifax bookshops, pick up a copy of the History and Holiday edition of Atlantic Books Today, available on stands now. Page 38 features a story on historian Steven Laffoley and The Blue Tattoo (Pottersfield Press), his new novel focusing on none other than the Halifax Explosion.