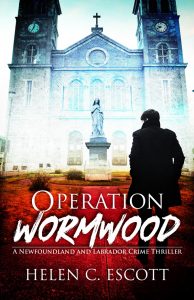 For the first time in social media, God began to trend.

With that line, Helen Escott provides a moment of light relief in an otherwise harrowing story of child molesting, corrupt priests and a vengeful God. Add to that murder, suicide, PTSD and spewing blood that challenges the puking in Rosemary’s Baby and you’ve got Operation Wormwood, a new thriller out of Newfoundland and Labrador.

The story takes hold immediately and doesn’t let the reader go until it’s over, featuring a plot peppered with philosophical questions, moral quandaries and personal nightmares. You might say, “my cup runneth over,” and you would be well in the spirit of this novel with its biblical quotations, religious refrains and a multiplicity of moral issues.

Archbishop Keating is admitted to hospital in St. John’s, Newfoundland, suffering from massive nosebleeds, agonizing pain and a thirst he can’t slake because water tastes like vinegar to him. Other victims suffer the same symptoms and check in at ER in St. John’s and in cities across Canada, afflicted by a plague that attacks men (and at least one woman) who have abused children.

It’s quickly established that, unlike a plague, the disease is not infectious. In fact, it’s limited. What the victims have in common is that they’re pedophiles.

The novel turns on two main possibilities: that the plague is a poison, wormwood, that someone is using against child molesters; or that God is the guilty one, visiting revenge on pedophiles with the creation of a disease that punishes them with merciless pain. Underscoring this suspicion is that the pain seems to be worse when the victims of abuse think about the torture they experienced at the hands of unscrupulous priests, teachers and other people in power.

Grappling with this mind-bending situation are Dr. Luke Gillespie, RCMP Sgt. Nick Myra and Father Peter Cooke. Dr. Gillespie considers himself duty-bound to treat these patients, distasteful as they are. He calls on doctors and hospitals nationwide to share information about the disease but a cure eludes him and one after another his unsavoury patients die. His is not a popular position. Many believe that wormwood is a justifiable plague against pedophiles.

Father Peter Cooke is one of them. For him, wormwood is a blessing.

He rallies the city’s Catholics to a mass of thanksgiving to the Lord for bringing this punishment down on the sinners. It brings the faithful back in droves to the church, grateful that #GODISBACK.

Cooke’s prayers have been answered, his church pews filled by the justice the Lord has meted out. For him, wormwood is the cure: divine punishment for the ungodly. It provides a worldwide boost for the Catholic Church that brings Cooke to the notice of the pope.

Sgt. Myra is not ready to accept the church’s view of what’s happening to pedophiles and mounts an investigation of the molesters and their victims, desperately seeking a common thread, a solution. Blood tests and common sense prove that it can’t be poisoning by a single serial killer or a string of multiple killers. But Myra doesn’t see the disease as the work of God either.

So what is it? To answer that here would be telling. The ending is, at the least, unexpected. It may not satisfy all readers.

The author asks readers to consider a host of moral dilemmas throughout the book and in the end tests their faith with a surprising conclusion. Or perhaps Escott has provided the ideal realistic ending; after all, in life, where are the easy solutions?

The casualties mount on the way to this uncertain conclusion, made the more surprising by the revelation of two characters suffering PTSD and finally a pair of suicides that add to the mountain of tragedy.

As a retired civilian member of the RCMP, Escott certainly knows her stuff. She took a decade to work on this book. It shows in her meticulous research and use of facts to flesh out a dark story of murder, abuse, suicide and human frailty.

Operation Wormwood is a story that pulls readers in at the very start, draws them through a frightening series of events and finally explodes, leaving them to question their own beliefs.

Hilary MacLeod is a writer and former journalist and broadcaster who divides her time between a cabin in the woods near Ameliasburgh, Ontario, and a house in Sea View, Prince Edward Island -- a house that was once inhabited by the hired hand on L. M. Montgomery’s Uncle George Campbell’s farm. She is a professor of Media Studies at Loyalist College, and spends her free time plotting what her next murder will be.