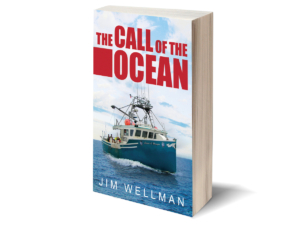 Who answers to the call of the ocean?

If there is anyone who can answer that question — and roll out 28 engaging chapters on the subject — it is Jim Wellman.

For starters, the author grew up in Newfoundland and has close ties to the sea. Although he chose the life of a journalist instead of following in his father’s footsteps as the captain of a schooner, Wellman’s life has been immersed in stories of the ocean and the people who ply her shores.

To wit: for 15 years Wellman hosted CBC Radio’s Fisheries Broadcast in Newfoundland. He’s also penned nine books that are associated with the sea and, in 2002, he took on the role of managing editor of The Navigator, which features marine life and the fisheries in Atlantic Canada.

It comes as no surprise, then, that in his career he’s met countless characters who are connected to the ocean and deeply rooted to the sea. Some of these characters have ended up in his latest book The Call of the Ocean.

You’ll meet people like Dion Faulkner who started off one day excited as a kid to be going “birding” (salt water duck hunting) but ended up in a living tragedy that claimed the lives of five others.

Further along in the book there’s Norma Richardson. Wellman describes her as “… not tall, but she casts a lengthy shadow in the world of fisheries in eastern Nova Scotia. In fact, someone said that if Norma were not there to help fishermen forty years ago, they would have to invent her.”

The characters in Wellman’s book are as varied as fish in the sea. Yet they have one thing in common: they all have led fascinating lives, and their stories are heartfelt. Expect a good dose of solid reporting, laced with liberal amounts of insights.

The Call of the Ocean
by Jim Wellman
Flanker Press