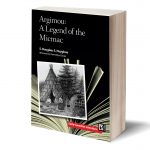 One part adventure-romance, one part mismatched hero tale and one part commentary on the marginalization of the Mi’kmaq, Argimou: The Legend of the Micmac might seem complicated at first glance. However, its overarching message of acceptance and understanding is much more prominent than any of its complexities.

Argimou, written by Douglass Smith Huyghue, takes place after the fall of Fort Beausejour, near modern day Aulac, NB in 1755. After learning that his fiancée, Clarence Forbes, has been kidnapped by the Maliseet, Edward Molesworth looks to Mi’kmaw Argimou, who was captured during the battle, to help find his beloved. Arigmou agrees, in exchange for his freedom and because the subject of his affection, Waswetchul, has also been taken.

Together the unlikely duo and a few others move across Nova Scotia and New Brunswick on their quest.

From a modern point of view, Argimou is a good story, but Huyghue’s focus on geography and contextual summaries bring it down, especially in the beginning. These long passages can run on, leading readers to set the book aside rather quickly. Also, as an adventure tale, there doesn’t seem to be much action, minus the final battle, making the whole story seem bland.

Despite these faults, Argimou should be read in a historical context. Originally published in 1847, it presents Indigenous peoples in a more favourable light, going against popular opinion of the time, Arigmou is not portrayed as an unforgiving, monstrous savage or even a side character or sidekick. He a protagonist and title character; he is a sympathetic, honourable and relatable hero. His characterization would have asked Victorian readers to look beyond contemporary stereotypes and societal conventions. It is that approach to Argimou as a character that makes the whole book a worthwhile read, even for for modern audiences.