Bertin lives in Halifax, Powell in Moncton and Narbonne currently lives in Windsor but spent years living and studying in Halifax. Each author will have a chance to win one of three prizes—one first prize of $10,000 and two additional prizes in the amount of $500.

“I had hoped to be nominated for this award; it’s really prestigious,” says Powell. “I love short fiction, so it’s always been on my radar. I’m very honoured. I really liked the writers who were judging this year as well, so it’s a big deal for me. I don’t know the other writers but I’m really happy to see Kris Bertin there; I really like his work. He’s a really good stylist but he’s pretty down to earth and those are two things that I really value in writing.”

While Powell had her hopes up, Narbonne hadn’t even written down the date. He found out he’d made the shortlist when people starting emailing. “It was a complete surprise,” he says. “This award means that significantly more people will care about the book. Books can be a voice in the wilderness. I think the award is brilliant and I’m so grateful for it because I want the book to be read. It will get people talking.” 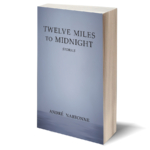 Bertin fell somewhere in between. When asked to describe his reaction, he replied, “Trepidation. Good news is like a pair of scissors. You have to be careful with it. If you get too excited and run around with them, you’ll get hurt. I’m the kind of person who has to accept that they’re not going to win, so that when I don’t, I feel exactly the same.”

The shortlisted authors were all excited to have the judges read and validate their work. This year, the jury included Caroline Adderson, author of short story collection Pleased To Meet You; Judy Fong Bates, who wrote the memoir The Year of Finding Memory; and David Bergen, author of the novel Stranger.

“The judges are great. And David Bergen I’ve taught,” says Narbonne. “I’m just thrilled that people of that calibre read and liked my book. I’m just gushing positivity right now because I’m so happy about this.”

“I really like Caroline’s work, and I like David Bergen as well,” says Powell. “I haven’t read Judy’s work although I’ve heard really great things about it. When there are judges you admire it makes it more substantial to you personally.”

Awards like the Danuta Gleed can make a big difference for both seasoned and debut authors. 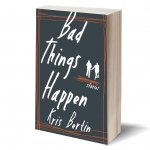 “Literary fiction, especially short fiction, is a hard road to take in terms of making a living,” says Bertin. “These awards offer attention that you might not get for your work, and if you’re lucky, money that you certainly wouldn’t get. They are crucial, especially for people starting out in this business.”

These awards provide motivation and validation as well, things most writers struggle with.

“It draws attention to your work,” says Powell. “But for me, having a nomination like this gives me courage. It can help you understand that the path that you’re taking is worthwhile. It validates you as an artist a bit. And that’s the thing that I think is the most valuable. I mean, obviously the cash would be great. But being nominated, having your work appreciated, it gives you the courage to carry on doing something that is often really lonely, hard work.”

The winners will be announced during The Writers’ Union of Canada’s OnWords Conference. The conference will take place from June 1-4 in Vancouver.

Short fiction fans will have to wait until then to find out which author will take home the $10,000, but until then, Bertin’s willing to make a prediction about the outcome of the Danuta Gleed Literary Awards and the Alistair MacLeod Prize for Short Fiction, which Bertin and Powell also shortlisted for.

“Paintbrush is undeniably great and is one of the best collections I’ve read in a long time,” he says. “There’s a reason I’m up against Powell for The Danuta Gleed as well. I anticipate she will win both, because she is the best.”