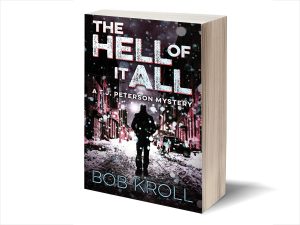 “He had parked with the Jetta aimed at the harbour mouth, giving himself a postcard perspective of the naval base, two islands, and the concrete and glass of the downtown. He looked without seeing Halifax as the ‘vibrant and safe capital city by the sea’ promoted by the tourist board … He saw what the cops see: the hard side, the ugly side, the side unreported in the press.”

No city can possibly claim to be perfect and doubtless the municipality of Halifax, Nova Scotia is no exception. Despite its reputation as being a beautiful and outwardly friendly place to visit, Halifax cannot possibly be as idyllic a destination as tourism commercials would have us believe. Yet you’d be hard-pressed to find a depiction of a major Canadian city as unremittingly bleak as the metropolitan nightmare author Bob Kroll makes of Halifax.

The Hell of It All, the second in a planned trilogy of T.J. Peterson mystery crime thrillers (after The Drop Zone), is another two-fisted descent into urban chaos. Like the first novel, Hell is a dark, densely plotted, sink-or-swim tale. Kroll is not afraid to throw you headfirst into the deep end.

Peterson is a former police detective in a bad state. Forced to retire (after events in the first novel), Peterson now spends his days working crimes under the table for his former partner. While running down a rumour of a thirty-year-old murder, a past lover tracks Peterson down and begs him to find her daughter, a drug addict who has taken up with a local pusher. Unwilling yet unable to turn her down, Peterson quickly finds himself trapped in a byzantine puzzle that leads him through the dark depths of Halifax, filled with crack houses, prostitution, money laundering and more.

Drawing on the classic hardboiled influences of Raymond Chandler and Ross MacDonald, as well as modern crime authors such as George Pelecanos and Canada’s John McFetridge and Robert Rottenberg, Kroll thrusts us into a stylized, dialogue-heavy crimescape where every statement hides an angle and no one is to be trusted. In this world, a minor criminal is described as “the kind who talks speed but cruises twenty clicks under the limit,” a face “looked like it could cry on sunny days” and a man gets tossed down a flight of stairs and “deserved every step he hit.” Numerous nefarious characters with names like Sammy O, Turtle and the Runt hurry through the pages. It may take a little patience with the tough-guy cadence of Kroll’s narrative to fully chart the ins and outs of Peterson’s sleuthing.

As much nasty pleasure as there is to be found in Kroll’s Halifax, he hasn’t yet quite mastered the style of his criminal writing forebears. Often the story becomes a case of an author telling rather than showing, not trusting the action to make the point clear. This burdens characters with unwieldy soliloquys such as: “There used to be something that made us obey the law. Not because it was the law, but because it was the right thing to do. But now there’s nothing keeping people from doing whatever they want. Nobody cares about anyone else but themselves.”

At one point, Peterson tells a pair of homeless teenagers, “I was a homicide detective. A cop for more than twenty years. What comes with all that time on the job is instinct. You get a feeling about what people know and what they don’t know. Now I’m retired. I have nowhere to go and nothing to do.” It’s one thing to define Peterson as a character through action and circumstance, another entirely to have him summarize himself in such a clunky fashion.

Luckily, the mystery itself is solid, the plot machinations logical and Peterson is an engagingly pessimistic (if thoroughly miserable) protagonist. Kroll understands that no matter how complicated the mystery it’s the personalities populating the pages that keep readers coming back. He takes pain to root his story in character as much as plot and finagles Peterson through the requisite twists and turns of this labyrinth with aplomb.

The Hell of It All may stumble occasionally, but it’s a solid crime thriller that leaves the reader wanting more, if, arguably, less enthusiastic about visiting Halifax.

The Hell of It All
Bob Kroll
ECW Press