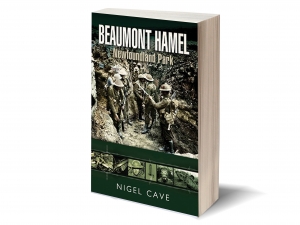 “The battle commenced, the various battalions moved to the attack, and the attack crumpled.”

In this one sentence, author Nigel Cave succinctly encapsulates July 1, 1916—the infamous “First Day on the Somme.”

At 7:30 am on that fateful day, 100,000 British soldiers from 14 divisions rose up out of their trenches and advanced toward the German lines at a stipulated walking pace of 91 meters per minute, each carrying a 32-kilogram burden. Within the first hour, the British suffered 30,000 casualties; by nightfall the butcher’s bill added another 28,000.

It was the single worst day in the British army’s history.

Although no Canadian units took part, the Newfoundland Regiment did—and was nearly wiped out—33 years before the colony became a part of Canada. To acknowledge the battle’s centennial, Flanker Press has acquired the rights to this book, originally published in Britain in 2000. Beaumont Hamel: Newfoundland Park offers not only in-depth descriptions and analyses of various battles, but comprehensive walking and driving guides for battlefield visitors.

This is a battle of which every Canadian should be aware—and this is the book to learn about it.