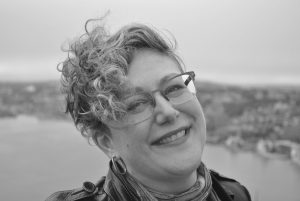 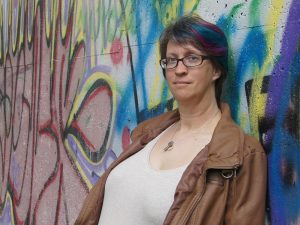 Newfoundland author Trudy Morgan-Cole tells Michelle Butler Hallett how the women in her books found their way to the fore, “…most often the characters who end up wanting to tell the story are the women.”

Michelle Butler Hallett: Your characters are vivid and nuanced and early in your new novel, Most Anything You Please, I was waiting for the various male characters to,

well, take over, as tends to happen in what we privilege as Serious Novels Which Tell Important Stories. The male characters don’t take over, of course. Would you say you’ve written women’s fiction—or just fiction?

Trudy J Morgan Cole: I would say I just write fiction—unless we are going to start calling fiction with predominantly male characters “men’s fiction.” I don’t know that I deliberately privilege female voices. I love some of the male characters I’ve created in this and other books and I have occasionally written from a man’s point of view, but women’s stories interest me.

I had originally intended to have four main point-of-view characters in this novel, one from each generation of Holloways: Ellen, Audrey, Henry and Rachel. As the story unfolded it felt more natural to keep Henry’s point of view just in the musical interludes, the scenes where he is performing, and leave the narration in the main chapters to the women’s perspectives. So there are long stretches where Henry disappears from the narrative, just as he disappears from his mother’s and his daughter’s lives. The reader, like Audrey and Rachel, doesn’t know what’s happening with Henry during those stretches.

Ellen and Audrey, as women running a small business (which women often did in the family-owned corner shops), were interesting to me. Audrey’s experience as a war bride, one of the thousands of Newfoundland women who married American servicemen–that was a perspective I wanted to explore. My stories are very character-driven and most often the characters who end up wanting to tell the story are the women.

MBH: Songs run through this novel like a nervous system. Can you comment on why songs root your characters?

TJMC: Music is really important to me, so it’s often important to my characters. But beyond that, this is in many ways a novel about aspects of Newfoundland culture, and maybe especially St. John’s culture, cultures that changed as I grew up. The loss of the family-owned corner shop is one casualty of those changes. It seems to me that at the very time much of our traditional way of life was changing Newfoundlanders were also finding their voices and using art to lament a lost way of life. Our music, literature, theatre, all really blossomed in the 1970s, 80s, into the moratorium years of the 90s. It’s as if we began performing this idea of Newfoundland culture just at the time we were no longer living it firsthand.

That same cultural change is reflected in the Holloway family in Most Anything You Please. Ellen’s husband, Wes Holloway, sings and plays the accordion but he would never think of himself as a musician. He’s a carpenter and he and his wife own a corner shop. Ellen and Wes are focused on making a living. So is Audrey, even though music is one of the key ways she defines herself—but as audience, not as performer, because Audrey shares my misfortune of loving music but being unable to carry a tune. When her son Henry wants to become a musician, even though Audrey loves country singers and reveres the memory of Hank Williams (Senior), she doesn’t see music as a serious career option for her son. Henry does become a musician but he sings country and rock ‘n’ roll. It’s his daughter, Rachel, who explores Newfoundland folk music because she comes of age in an era when young Newfoundlanders are finally starting to sing and write and perform about their own culture—which by that time is largely the culture of their grandparents’ era.

MBH: The female main characters all do work that is undervalued yet important, and you honour that. Did this come from observing the women around you?

TJMC: I’m not really sure where it comes from, but I am very interested in women’s work and in the lives of women in earlier eras, the choices they had that were so much more limited than the choices I grew up with in the 1970s. This is the second novel I’ve written—By the Rivers of Brooklyn was the other—that follows multiple generations of the same family up to nearly the present day. And in both novels I was interested in how each successive generation of woman has choices—career choices, personal life choices—that their mothers lacked. I hope that will continue to be true in our daughters’ and granddaughters’ generation. I don’t think we can take that for granted.

MBH: How does this novel connect to your other work?

TJMC: I have always been interested in the untold stories of women. I had a previous career writing fiction about women of the Bible, these women whose stories are often condensed to a few verses because they aren’t the main characters like the men are. And I wrote a novel called The Violent Friendship of Esther Johnson, about a real woman in early 18th-century England whose existence we only know about because she was friends with a famous man—the writer Jonathan Swift. So about 10 years ago, when I turned to writing novels digging into our Newfoundland history, it was again women’s stories that fascinated me.

For By the Rivers of Brooklyn, I knew about the men who went to work on the high steel and in other industries, but what about women like my grandmother, who went to

New York to clean other people’s houses? Where were their stories? With That Forgetful Shore, I was intrigued by the domestic work of women like my character Triffie, fishermen’s wives who were the backbone of outport communities, and women like her friend Kit–the teachers in one-room schoolhouses. With A Sudden Sun, I was drawn by the work of the women who fought not only for the right to vote but for so much social change, who spearheaded the temperance movement and the social-work movement, and who wanted the vote because they believed that with it they could make a better world.

So when I thought about writing a book that was rooted in the streets I grew up in–this Rabbittown neighbourhood in the centre of St. John’s where I still live, these very working-class streets that sprang up after the First World War—and imagined a corner store as the lens through which I’d explore all this, it was inevitable to me that I’d think about the women behind the counter. Women often ran these small businesses and had their fingers on the pulse of the neighbourhood.

In a lot of my writing, I feel like I’m trying to hear and to re-create for the reader, the voices of characters—largely, though not exclusively, women characters—who didn’t make it into the headlines of history. Theirs are the kinds of stories that fascinate me.

Michelle Butler Hallett is the author of the novels This Marlowe, Deluded Your Sailors, Double-blind and Sky Waves, as well as the short-story collection The Shadow Side of Grace.