One of the most unheralded sector of the book world, especially in terms of the sheer volume of works it generates, is the art gallery exhibition catalogue. In Atlantic Canada alone, dozens of publications, ranging from booklets of but a few pages to hardcover tomes with hundreds of pages and multiple essays, are produced every year by galleries, museums and artist-run centres.

It’s fair to suggest that many of these publications go virtually unread, and certainly do not make any impression on the reading public of this region. That’s too bad, but lacking distribution for the most part, exhibition catalogues rarely make it into bookstores and tend to have little life beyond the time of the exhibition that they are accompanying. Often, they don’t even have that, as the publication arrives weeks or months after the end of the exhibition in question. The artist or artists get copies, and boxes of publications end up in storage in vaults, basements, closets and warehouses.

Yet, the art gallery catalogue remains just about the only vehicle for long-form writing about contemporary Canadian art, and an important part of every artist’s career promotion.

They also make for fascinating reading, with varied essays, interviews, good photography and important information on Canadian artists. Art magazines simply can’t compete with the sheer volume of words generated in exhibition catalogues, and the few newspapers that still publish art reviews never give the kind of space for thoughtful engagement with an artist’s work that one can find in a well-produced catalogue.

Three recent publications by galleries in three provinces in our region are evidence of the diversity of what galleries are publishing and the similarity in approach that differentiates an exhibition catalogue from a magazine article or a book. The diversity will become apparent in the discussion that follows; the similarities are in the presentation of more than one voice in the essays, and more specifically in the use of essays by academics whose research complements the subject of the exhibition. Academic writing is usually found in journals, often extremely specific ones with little, if any, popular following. These catalogues provide a platform for writing that is focused on culture and that few outside of the academy would otherwise have a chance to read.

Folklore and Other Panics, an exhibition at the Rooms Provincial Art Gallery in St. John’s last winter, was accompanied by a catalogue of the same name. Edited by the exhibition’s curator, Mireille Eagan, this small volume ably introduces the ideas that spurred the exhibition, and provides a forum for the artists to speak directly to the public about their work. Featuring two essays and interviews with each of the eleven artists whose work was included in the exhibition, the catalogue succinctly presents their work and that of the curator in a neatly designed small package. Bev Collett was the designer of this publication, with photography by Ned Pratt.

An essay by curator Eagan is accompanied by a series of interviews with each of the artists, and an essay by Newfoundland folklorist Lisa Wilson. All of the contributors speak to the central premise of the show – that culture is made by those who live it, and that that making is complicated, constant and ubiquitous. As Mireille Eagan writes, “There is no need to panic – what might appear lost is often still present, continuing within a living, changing culture.” Smart and engaging, the essays are a pleasure to read and the interviews succeed in giving a glimpse into the thought processes of the artists that one would not have had otherwise. 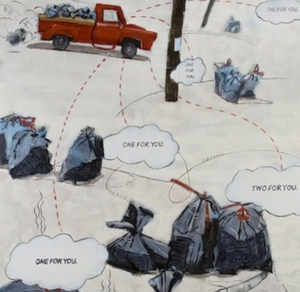 Reichertz’s exhibition of the same name at Saint Mary’s University Art Gallery in Halifax and the Carleton University Art Gallery in Ottawa. The exhibition was a series of large paintings in the manner of a comic strip, and in the catalogue they are presented as if one were reading a traditional comic. Prefaced by a short piece by an academic, Benjamin Woo, with a research interest in comics, and followed by an informative essay by the exhibitions curator, Robin Metcalfe, Garbage gives us a new take on an old medium. Less a book about comics, or paintings, for that matter, than a riff on the idea of a comic, and on the nature of the image. Garbage may not be a comic per se, but it was co-published by a noted comics publisher, Conundrum Press, and designed by its founder Andy Brown.

Hank Bull Connexion is the most book-like of these three publications, and by far the largest and most ambitious in scope. Co-published by the Confederation Centre Art Gallery and the Burnaby Art Gallery (and designed by Mark Timmings), the catalogue looks at the long career of Vancouver artist Hank Bull. As with the other two works, this catalogue features multiple essays (including a marvelous illustrated chronology by the artist hRay imself) and many, many images.

The two co-curators, Pan Wendt and Joni Low, each contribute an essay, as does Serge Guilbault, an important Canadian art historian. Treating the entirety of a career with its roots in the early 1970s, Hank Bull Connexion is informative and entertaining, providing a sense of Bull’s work and the impact he had as an artist and organizer on his community and on the Canadian art scene. Guilbaut’s contribution was a particular pleasure to read, an erudite and compelling argument for Bull’s national and international importance as an artist. The national aspirations of this project are made clear in the fact that the book is published in both French and English, creating a document about Canadian art history that is available to interested readers across the country in both official languages.

Each of these publications serves an important role in the conversation that is Canadian culture. Exhibitions are by their nature ephemeral; publications have more permanence and more portability, expanding the potential audience for these projects.

Galleries constantly question whether or not the time and expense of publications are actually justified. It’s a fair question; as stated above, too often the publications languish, never finding any audience. That should not be the case here however, as these publications all seem well positioned to have a longer life than the standard three-month run of an exhibition.