A search around the world for a better future, a better way of helping those in need, led author Augusta Dwyer to Antigonish, Nova Scotia, into the heart of a movement that began in the 1920s.

The movement that pushed rural Nova Scotians to band together and embrace their strengths, as well as allow them to be empowered by their status as rural residents, has since gone international. 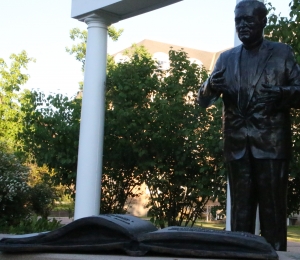 Rev. Dr. Moses Coady, after whom the now prestigious Coady International Institute of St. Francis Xavier University is named, founded the Antigonish Movement. The institute was named after him to continue his development studies and share the lessons he spread throughout Nova Scotia.

While spending her time in Haiti researching her book, The Anatomy of Giving, Dwyer came in close contact with many international aid organizations, but not many carrying out their aid work with the same strategy as that of the Coady Institute graduates and liaisons. She had only heard of a small handful of other organizations with the same approach.

“I think Coady does everything pretty well,” she says. “I think that they have a huge impact.”

Dwyer’s book focuses on the impact that large international aid organizations have and how they operate with a top-down approach, compared to smaller bottom-up organizations. While citing successes of the bottom-up approach, she refers to the Coady Institute as a leader in this methodology. 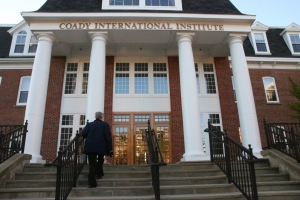 As well as hosting classes at the Institute in Antigonish on the St.FX campus, Coady also travels internationally to offer leadership programs in various countries, in order to help developing areas gather the tools to help themselves. As Dwyer notes in her book, the Institute is currently involved in a project in Haiti called the Centre for Leadership and Excellence.

“We’re really impressed with it,” says Gord Cunningham, Assistant Director of the Coady Institute. “Our role started out as very hands on, then [Haitian residents] wanted to start an organization.” From there, the Institute had various professionals go to Haiti, while some Hatians  travelled to Antigonish to learn about how they could influence their communities as citizens, and start their own movement to better their area.

One outcome was the Combit Program, started by youth, which organizes community work parties focused on large projects.

“There is some very successful work with women and youth,” Cunningham says. “Now the Coady role is quite minor. We help connect them but we’re not as hands on as we were. They felt that for the mindset to change it was too difficult to start from the top down.”

Cunningham sees the paradigm of world aid shifting slowly to a more hands-on, bottom-up approach, with more operations to help create sustainable communities that can help themselves. “People have to be the drivers of their own development,” he says.

This approach is what drew her to the Coady Institute and what brings others from around the world to their doors looking for solutions.

“I just have such huge admiration for them and what they do,” says Dwyer.

Heather Brimicombe has a combined honours degree in journalism and sustainability from The University of King's College. She is currently a reporter with The Pictou Advocate.