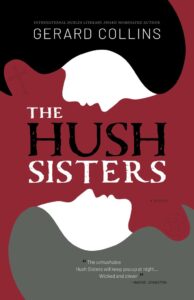 The strange manor house,at 333 Forest Road on the edge of the city’s downtown, with “pock-marked siding, cracked basement concrete, and flapping shingles” is more than just a building that needs to be sold or a decaying façade—it is a place—filled with ghosts—that holds dark secrets of death and cruelty inflicted on the Hush family who lived there.

By weaving psychological suspense and violent memories with elements of the fantastic, Collins has written a contemporary urban gothic story that will literally have you gripping the book. The suspenseful plot is unsettling. Something sinister will happen, but you don’t know what and must read on until you find out what abuse the sisters endured, and if they make their way out of the trauma they suffered to a more hopeful future—far away from the haunted house where they spent their childhood.

Collins draws readers in with his tight, controlled writing.“The fog often fell upon St. John’s harbour like a wolf that preyed upon a lamb—stealthy, sudden, and inescapable,” he writes. A forewarning of what is to come.

The Hush Sistersopens with sisters Sissy and Ava Hush reuniting at 333 Forest Road after a long absence. Ava, an outgoing television producer, has returned to St. John’s from Toronto after losing her job. Claiming she is there to help her sister—a quiet recluse, who still lives in the house years after her mother and father died—Ava returns with her strong opinions and volatile emotions, which often leave Sissy feeling as though she has been overwhelmed by “Hurricane Ava.”

Both women live alone. Both feel terribly lonely. They love and need each other but the twisted cruelty inflicted on them by their father, a once successful businessman, has left them deeply wounded and so far, unable to find lasting love. Neither can change or cede to the other’s wishes until they voice their disturbing secrets, face the ghosts of their past selves and confront the sinister forces at play. The sisters realize they must tackle these forces together if they want to save their relationship.

Now that their parents are dead, Ava wants to sell the house quickly, rid herself of its darkness and take off with the money. Sissy is tethered to the place.

The house is Sissy’s anchor; she is scared to leave it, even though it has brought unhappiness and loss. Her mother died in the garden behind the house, her husband left her there and her father tortured her, right until his dying days, hurling abuse at her as she cleaned his bedpan. Despite all this, she doesn’t leave “…the Hush house—whereeverything that came wanted to leave and everything that wanted to leave, stayed.”

Ava learns that her sister hasn’t been living alone in the house. There are spectres—a young woman in a white dress who appears at the window, a man in a black nightshirt and the girl who moves freely throughout the house.

“She’d named the ghost girl ‘Clair,’ and she thought of her as something like a guardian angel, the kind her mother often had told her about. These apparitions often left Sissy confused about what was solid, what was imaginary, but, more and more, she was getting used to not knowing everything,” writes Collins, who was born in Newfoundland, but now lives in New Brunswick. A writer of both books and short stories, his first novel, Finton Moon, was nominated for the International Dublin Literary Award and won the Percy Janes First Novel Award.

The horror and darkness in The Hush Sistersis intermixed with hope, which comes to the sisters through their deepening honesty and understanding of each other, and their relationships with Britney, a kind yoga teacher who lives next door, and her cousin Angus, a pensive musician visiting from Ireland and playing at bars around the city.

I didn’t want to think about The Hush Sisters after I read the last page, but I had no choice. Its startling secrets haunt me.

ALLISON LAWLOR’s work has appeared in The Globe and Mail and several magazines. She is the author of several non-fiction and one children’s books. She lives in Prospect, NS, with her husband, two daughters and several animals.