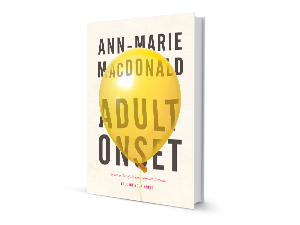 Dreams of an Everyday Housewife

In the midway of this, our mortal life, Mary Rose MacKinnon is at her cheerful kitchen table checking e-mail. It is Monday. Her two-year-old is busy driving a doll stroller into the baseboard, so she has a few minutes. Your 99 friends are waiting to join you on Facebook. She deletes it, flinches at another invitation to appear at a literary festival, skims her five-year-old’s school newsletter online and signs up to accompany his class to the reptile museum. She skips guiltily over unanswered messages and cute links sent by friends—including one from her brother that shows a fat woman whose naked torso looks like Homer Simpson’s face—and is about to close it down when her laptop bings in time with the oven and the incoming e-mail catches her eye. It is highlighted in queasy cyber yellow and bears a dialogue box: Mail thinks this is junk. She eyes it gingerly, fearing a virus or another ad for Viagra. It is from some joker—as her father would say—with the address ladyfromhell@sympatico.ca and in the subject line:

Some things really do get batter . . .

A baking newsletter from a mad housewife? She bites, and clicks.

Mum and I just watched the video entitled “It Gets Better” and I thought I’d try out the new e-mail to tell you how proud we are that you and Hilary are such good role models for young people who may be struggling against prejudice.

PS: Hope this gets to you. Just got the e-mail installed yesterday. I am now officially no longer a “Cybersaur”! Off to “surf the net” now.

My goodness. She types:

Dear Dad, Congratulations and welcome to the twenty-first century!

No, that sounds sarcastic. Delete.

She is proud that he is proud. And that he is proud that Mum is proud; of whom Mary Rose is also proud. Sigh. She does not like screens, convinced as she is they have some sort of neurologically hazing effect. She ought to write her father an actual card with an actual pen to let him know how much this means to her. She gets up and slides a tray of vine-ripened tomatoes into the oven to slow-roast—they are from Israel, is that wrong? “Ow. Careful, Maggie.” “No,” croons the child in reply. She returns to the table, its bright non-toxic vinyl IKEA cloth obscured by bills and reminders for service calls she needs to book for the various internal organs of her house. Bing! Your 100 friends are waiting . . . A month or so ago she tripped on a root in cyberspace and accidentally joined Facebook; now she can’t figure out how to unjoin. She has visited her page once, its silhouette of a human head empty but for a question mark at the centre, awaiting her picture, like an unetched tombstone—we know you’re coming . . . eventually. Her unadorned wall was full of names, many of which she did not recognize, some of which bore the rank odour of the crypt of high school. What is this mania for keeping in touch? she wonders. Mary Rose MacKinnon is unused to continuity. She grew up in a family that moved every few years until she was a teenager, and each time it was as if everything and everyone vanished behind them. Or entered a different realm, a mythic one wherein time stopped, the children she had known never grew older and, as in a cartoon, people and places retained the same clothes and aspect day after day, regardless of weather, explosions or being shot by Elmer Fudd. She would not change a thing, however, each move having brought with it a sense of renewal; as though she had outrun a shameful past—starting at age three. Nowadays, she reflects, no one is allowed to outrun anything. If one kid slugs another in the park, they’re packed off to therapy. Delete.

Excerpted from Adult Onset.  Copyright © 2014 Ann-Marie MacDonald.  Published by Knopf Canada, a division of Random House of Canada Limited a Penguin Random House Company. Reproduced by arrangement with the Publisher. All rights reserved.

Ann-Marie’s first novel Fall on Your Knees (1996), was a critically acclaimed international bestseller. It won the Commonwealth Prize, was short-listed for the Giller Prize, and won the People’s Choice Award and the Canadian Booksellers Association Libris Award for Fiction Book of the Year. The Way the Crow Flies (2003), was an international bestseller, a finalist for the Giller Prize, and a Good Morning America Book Club pick. Adult Onset was published on October 2014. Ann-Marie is presently host and narrator of CBC’s Doc Zone. She lives in Toronto.