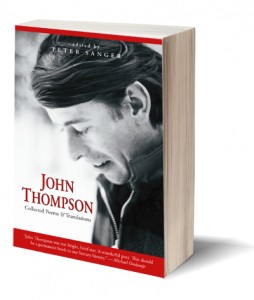 John Thompson’s brief life –alcoholic, unpredictable and controversial– is the stuff of Canadian literary legend, and of Peter Sanger’s fascinating introduction to his reissued John Thompson Collected Poems & Translations. But Thompson’s poems speak to the silent core of a man whose reverence for the natural world and poetry glow white against the inner and outer darkness he often writes about.

The book contains the two slim volumes of poetry that Thompson, a Mount Allison University professor, published in his lifetime —At the Edge of the Chopping There Are No Secrets and Stilt Jack– as well as uncollected earlier and later works, and his translations of French Canadian contemporaries and France’s Rene Char. Deeply intelligent and spare in form, but rich and elemental in their imagery, there is no sloppy or superfluous word. In “Moving Out, Moving In” Thompson writes, “This is our misfortune/ and maybe/our small grace:// we throw words at the dark/ and the dark comes/ back to us.”

It is the ghazals of Stilt Jack, however, that stand out for their confessional intensity as well as for an earthy and sometimes terrifying beauty. In his introduction to the form, which originated in Persia, Thompson writes, “The ghazal proceeds by couplets which (and here, perhaps, is the great interest in the form for Western writers) have no necessary logical, progressive, narrative, thematic (or whatever) connection.” It is the freedom within a form allowing the “greatest controlled imaginative progression” that attracts Thompson. Image such as ghazal XIV’s “All night the moon is a lamp on a post;//things move from hooks to beautiful bodies. Drunk.//” are counterpointed with commentary on his craft, and himself “In dark rooms I lose the sun: /what do I find?// Poetry: desire that remains desire. Love?/ The poet: a cinder never quite burned out.”

Some of Thompson’s earlier works in the book are evidence of a youthful virtuosity, influenced by such poets as Dylan Thomas and William Butler Yeats. But there is more power and pathos in his final uncollected and partly illegible ghazal, “XXXIX”, which he threw on the floor and ground with his boot. “I am dark/I’ll wash my own hands.// All the bad fighting, people/ in bad brew;//I’ll have to die: no one’s/ worth it.// Lord (three words unclear)/ sit (one word unclear)// I’ll (one word unclear)/ with you.”

Anna Quon is a poet and novelist living in Halifax.