Ian Colford’s Perfect World is A Dark Journey Into Psychosis 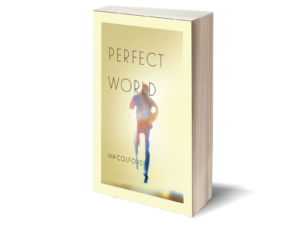 Ian Colford’s short novel Perfect World will be too short for some readers and too long for others. It’s beautifully written but the subject matter is so horrific that it is a hard book to finish. Tom Brackett, abandoned by his schizophrenic mother and alcoholic father at age thirteen, is left in the care of a demented grandmother, yet somehow manages to survive, apparently intact. He has a generous and positive nature, gets a good job as a mechanic, and eventually acquires a loving wife, two kids, a house and a dog.

Tom’s world is ideal, until he slowly succumbs to paranoia, depression and anger that finally explodes into a full-blown episode of psychotic collapse. In the grip of his demons, he commits an act of unspeakable violence against a member of his family, a crime that causes him to lose everything he loves.

There is little in the way of dialogue in this rather dire tale. Tom is not much of a talker, and nobody in his family ever seems to have anything useful to say to him, so it is the author’s voice we hear, describing the teeter-totter of Tom’s mental state as he struggles to control his rage, to ignore the whispering voices that intrude upon his reality.

Walking alone on a beach or a back road seems to be the only way Tom is able to bring balance, or equilibrium back into his life, but even nature turns her back on him at a critical moment, so that the evergreens in his yard look like “bent-backed refugees from some borderland wracked by armed conflict.” The conflict is, of course, all in Tom’s head, a head that he can’t see into or understand.

Human communication, or lack of it, seems to be the major impediment to Tom’s mental well being. He not only can’t talk to people, he can’t look them in the eye, can’t see behind the misery of their lives. His institutionalized mother serves as a mirror for him, her slow deterioration and death acting as a prefiguring of his own probable end. When on a rare occasion he does look into her eyes, it is “like looking through a doorway into an empty room.”

The closest Tom comes to finding consolation, and to being heard by the reader, is when he speaks at his mother’s funeral. One old neighbour and three staff from the mental institution she lived in show up and he addresses them briefly, expressing the wish that he had known her better. For a fleeting moment, he catches a glimpse of “a life that could have been,” the perfect world that is beyond his grasp.

This is not a book for the faint of heart. Colford’s is a bleak and dark vision of a life doomed by heredity, geography, bad luck, and poor access to medical and social services. Tom’s journey through the world of severe mental illness is entirely devoid of humour or consolation. However it is a reflection of some people’s reality. Everyone knows someone who has gone down that road.

Michelle Butler Hallett has quite accurately called Perfect World “a haunting study in empathy,” which is probably as good an explanation for why the novel deserves an audience as any. Haunting it certainly is, to the point where it made this reader actually lose sleep. But the empathy is there also. The pivotal moment when you realize that Tom is coming unstuck is jarring: he wakes up with a headache that he attributes to his young son’s “deceitful manner … whiny tone and … sneaky furtiveness.” Somehow, Colford takes that warped observation about a perfectly normal little boy and forces you to see that it is simply not Tom’s fault. He achieves this partly through his characterization of Tom’s wife, who cannot tolerate the sin but still loves the sinner. Again, though, it is the author’s voice that is the dominant one here, and it is Colford’s compassion and his ability to identify with his mentally ill protagonist that carried the reader into a similar comprehension of the man’s dilemma.

It is this empathy that provides a minute glimmer of hope at the end. Despite his horrible crime, you close the book wishing Tom some measure of love in the future.