A Collection of Some of Newfoundland’s Best Plays 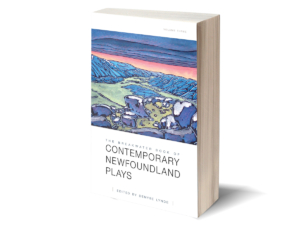 This anthology, Breakwater’s third devoted to plays, each edited by Denyse Lynde, contains a half-dozen works. Accompanied by full production details, it both preserves the texts of ephemeral theatrical experience and provides the mechanics for re-staging them.

Two are one-actor scripts: Robert Chafe, who won a Governor-General’s Award for “Afterimage,” has the droll, disquieting “Belly Up,” where a blind man waits (and waits, and waits) for his mother to come back from the grocery store. Andy Jones, an actor and writer who also has a GG (for children’s literature), has “Albert,” with its titular character home for the weekend. Socially isolated (his only companion is his budgie, Dopple), Albert narrates his weirdly, unexpectedly fantastic, predicament.

In Berni Stapleton’s “Rum For the Money,” three men in a boat are attempting to smuggle a load of rum from St. Pierre to NL’s south coast. The sea is calm but their motor is unreliable and the RCMP cutter is on the prowl.

Aiden Flynn’s “The Monk” is a two-hander with a young Irish monk and an aged Viking boatbuilder exchanging their differing beliefs and the life stories.

Edward Riche, also a screenwriter and novelist, has “Hail,” a tight, character-rich thriller with four middle-aged men brought together by their shared responsibility for a crime committed when they were university students. The tension is tactile: line by line Riche ratchets up the stakes.

Finally, Lisa Moore adapted “February,” her novel that won Canada Reads 2013. She did a skillful job translating the work to stage (incidentally its cast of seven is the biggest here). It’s a slimmer narrative but still full of affecting resonance.