Award-winning New Brunswick author Valerie Sherrard has once again succeeded in creating an earnest and appealing protagonist in this new offering for early readers. 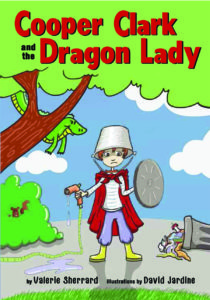 Cooper Clark loves Linda, his babysitter. Every day after school, he goes to Linda’s house until his parents come to pick him up. Then one day Linda tells his mother that she has been offered a new job at the Monkey Bowl, which means she won’t be able to be Cooper’s babysitter anymore. Things go from bad to worse when he learns that old Mrs. Mulligan is recruited to replace Linda. Cooper can’t believe his bad luck because Mrs. Mulligan has a dragon in her basement, and what none of his friends or family know is that he is extremely afraid of dragons. He tries everything he can think of to get out of going to Mrs. Mulligan’s house, but all to no avail. Ultimately, despite his best efforts, Cooper is forced to enter the dragon’s lair and face his fear…

Award-winning New Brunswick author Valerie Sherrard has once again succeeded in creating an earnest and appealing protagonist in this new offering for early readers. She portrays Cooper’s dilemma with sensitivity and compassion, and skillfully captures his genuine fear in a way that will elicit empathy from young readers. The adult characters in the story are also well-drawn and believable, and Cooper demonstrates ingenuity and resourcefulness as he concocts his various plans to avoid going to Mrs. Mulligan’s and being eaten by her dragon (even when he doesn’t necessarily foresee the consequences of his actions). Readers will appreciate the unexpected but satisfying ending.