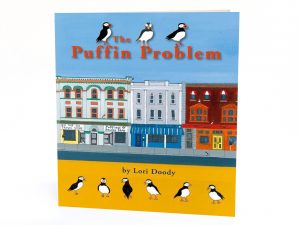 As this delightful story begins, we learn that “There once was a city by the sea with a peculiar problem.” Puffins have suddenly and inexplicably invaded this seaside town, turning up in museums and galleries, on rooftops and doorsteps, at major intersections and anyplace the eye can see. They seem to be especially fond of the downtown, where they prove to be a major distraction, tying up traffic and generally becoming a nuisance to all but the birdwatchers.

Would perhaps shipping them off to Iceland be a possibility? Fortunately “someone small and smart” proposes a more practical solution. Soon, boats filled with fish (donated by local seafood shops) head out to sea with a myriad of puffins happily following them to the ocean. Problem solved…for now!

Utterly charming and winsome, this book is a delight, from the beautifully decorated endpapers to each page in between. A backnote explains how young puffins do, in fact, ofen get confused by city lights and wind up stranded on land as they try to make their way to the ocean. Young readers may be inspired to learn about the Puffin Patrol that seeks to rescue and reroute lost puffins.

The simple, spare prose lends the book an understated quality that enriches the subtle humour and playfulness of the story. The illustrations are loose and layered and colourful with a folk-art flavour that perfectly suits the text and captures the distinctly Newfoundland setting. Using thin lines, solid colours and a predominantly flat perspective, Doodey conveys warmth and whimsy in every image and the cheery, cheeky puffins add an impish tone to the story. Children will relish the opportunity to pore over the images in search of puffins while adult readers will appreciate the cleverness of both the text and illustrations. 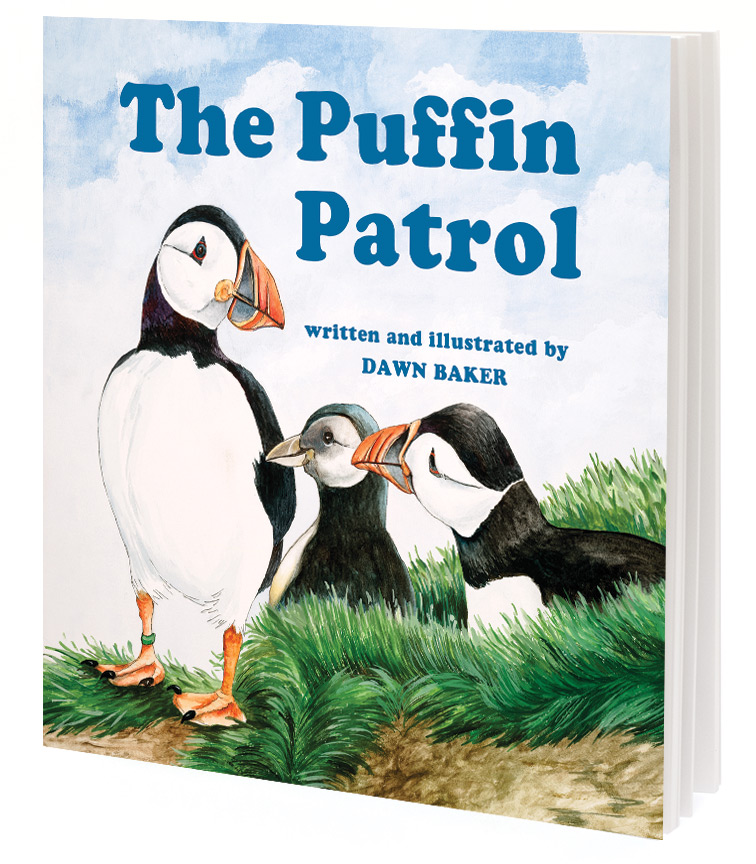 On a cool, damp late summer night, two young friends are nearly bursting with excitement as they prepare to embark on a very special quest, one that will hopefully result in the rescue of numerous baby birds that have lost their way.

Susan and Ryan have been invited to join Ryan’s older sister and other members of The Puffin Patrol as they comb the shores of Newfoundland’s Witless Bay in search of pufflings, baby puffins that have gotten confused by the lights and landed on shore instead of in the ocean. Each year, dedicated volunteers carefully search backyards, gardens and roadsides for any waylaid pufflings. The tiny creatures are then released back to the ocean.

After a night of searching for pufflings, Susan and Ryan go on a tour boat and help with the release of all the rescued birds. Many months later, when the two friends return to Witless Bay, they vividly recall how good it felt to be a part of such an important rescue mission. The wonder of it all still brings smiles to their faces.

Baker’s latest children’s book will surely tug at the heartstrings of young readers and their parents. It provides a wonderful introduction to the work of The Puffin Patrol, and contains fascinating and helpful information on puffins and some of the perils they face. The “Did You Know?” and “How Can You Help?” sections at the back of the book will give readers the opportunity to think about ways in which we can all do our part to help other creatures. Hopefully the joy and satisfaction that Susan and Ryan experience will serve as an inspiration to this book’s audience.

While the illlustrations do not fully capture the energy or excitement of the search for the pufflings itself, the delightful renditions of the puffins and pufflings are striking. This book is most successful as a source of information and may have worked better as a non-fiction book. But children who find it will nonetheless be intrigued by the true story of the work that this organization does.