Review: The Story of MUN 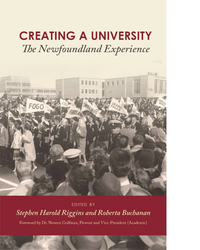 Ten years ago, when I was a student at Memorial University of Newfoundland (MUN), I heard a rumour that the library had been built backwards. This was supposedly due to an error by the contractor: the windowed part of the building facing north was supposed to face south where it would get more sunlight.

I loved that story, and I loved that library, and I was disappointed when Creating A University: The Newfoundland Experience, a collection of memoirs from MUN’s former faculty and staff, kiboshed the rumour once and for all.

But while the book was a buzz kill in the campus myth department—north-facing windows provided better reading light—the disappointment was offset by great anecdotes about the school’s history, including two of particular note:

#1– Premier Joey Smallwood wanted to drop “Memorial” from the title, but was advised to hang on to it as it was politically savvy to keep the military vote on side.

#2 – In an all-time-great auspicious meeting, Herbert Halpert, future head of MUN’s renowned Folklore Department, ran into Smallwood when he (Smallwood) was working as a pig farmer near Gander in the 1940s. Halpert was there to collect tales from working people in outport communities. Smallwood informed Halpert that he had already been doing so for some time.

Indeed, Smallwood is a big presence in the early sections of Creating A University, whose thirty-two essays move from the university’s establishment in 1949 to the end of the 1980s when MUN had more or less taken on its current form.

And while the early essays portraying Smallwood’s hubris and the chaos that accompanies any new endeavour are fascinating, the most enjoyable pieces were by “Come From Away” (CFA) faculty members arriving in Newfoundland during the 1960s. Their stories of neighbour kids amazed at a sandbox, weather leaving “much to be desired” and the price of fish (free if you stopped at a dock far enough from the city) were terrific.

Essays written by local professors counter these takes with their observations of being treated almost as “specimens” by the newcomers. Philosopher Lin Jackson’s essay asks who exactly is doing the gawking as recently hired profs get to know each other at a dinner party. Sociologist Ralph Matthews, who writes about his family’s roots there, also incorporates a brilliant broad strokes history of his home province.

The book is handy to a CFA like me, who’s been and misses it and was glad to get some more dirt on the place, even if it meant a bit of myth busting.

Aaron Williams lives in Halifax and is the author of Chasing Fire: A Wildfire Memoir. His writing has been published in newspapers such as The Globe and Mail, Halifax Chronicle Herald and Vancouver Observer.