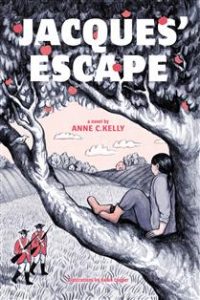 Writer and English language educator Anne C. Kelly transports her readers to the 18th Century with her historically-rich debut novel Jacques’ Escape. The story she tells centres around 14-year-old Acadian boy Jacques Terriot and his family’s struggle for survival as they are deported from Grand Pré to the British colony of Massachusetts during the Expulsion of the Acadians.

Upon being forcefully removed from his homeland, Jacques seeks to rebel against British tyranny and join in the fight to resist them, But over the course of the novel, he comes to realize that his Acadian identity means more than inhabiting a certain piece of land and that the greatest form of resistance is to carry on living.

Kelly’s meticulously researched, 133-page novel presents readers with an accessible account of the Acadian Expulsion, while also not shying away from the brutal reality of the era. Kelly’s expert use of simile and metaphor allows 21st Century readers to sympathize with Jacques’ complex feelings of betrayal, shame and desperation as he struggles to cope with the loss of his home and national identity.

One particular strength in Kelly’s writing is her ability to write authentic broken English dialogue, which Jacques uses to communicate with New Englanders, many of whom are far from accommodating to their new francophone neighbours. She also seasons the dialogue of Jacques’ Escape with basic French words and expressions to further immerse readers in the world of the novel and provides a glossary of the French vocabulary and place names that appear.

The text is accompanied by illustrations courtesy of artist Helah Cooper. The rich tones of navy, grey and red evoke the British military uniforms of the era, as well as the apple trees that remind Jacques of the Acadia he longs to return to.

At its core, Jacques’ Escape is a story of identity, refuge and hope that is sure to resonate with readers young and old.