Jon Tattrie on Peace by Chocolate 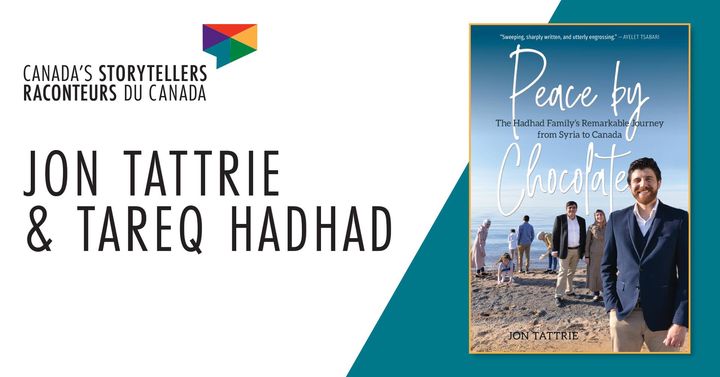 In addition to his two novels, Jon Tattrie has written biographies of some fascinating Nova Scotia people, historical and contemporary, including the infamous Edward Cornwallis, the dogged Eddie Carvery, and the scholarly Mi’kmaq Elder Daniel Paul. Now, with Peace by Chocolate, he has turned his attention to “the extraordinary story of the Hadhad family — Isam, his wife Shahnaz, and their sons and daughters — and the founding of the chocolatier, Peace by Chocolate.” Jon generously answered our questions about his riveting new book:

Atlantic Books Today: What is it that attracts you to writing biography?

Jon Tattrie: Basically I’m a novelist who is weak at creating characters and stories. I figured that if I could find amazing people with remarkable stories in real life, all I would have to do is write.

I loved sitting in Eddie’s trailer through the summers and winters, watching his world unfold in Africville, and absorbing enough of him to paint a portrait in words. With Dan Paul, it was an unbelievable chance to pick the brain of one of Nova Scotia’s fiercest intellectuals and learn how he slowly, almost magically, convinced Halifax to tear the Cornwallis statue down.

With Peace by Chocolate, I had a whole cast of characters, a multi-generation family story along the lines of John Steinbeck. Only I lack his creative talent to invent characters, so I got to tell a real story of grandfathers and grandmothers, mothers and fathers, sons and daughters, all on a dangerous journey to a new home.

ABT: And what was it specifically about the Hadhad story that made you want to take a deep dive?

JT: I thought it had the potential to work on the bigger stage of a book, where we can dive inside the hearts and minds of the family as they went through this heart-breaking and ultimately inspiring journey.

I think the biggest reason I wanted to write a book about it was because of what didn’t always appear in the news coverage: the women. Shahnaz, the mother, really stepped up when the Damascus home and factory were destroyed. She had the Canada vision most clearly and guided her entire family to safety. Alaa, the oldest daughter in Canada, lost her husband in the war and had to shepherd their two very young children into life as refugees, watching as the rest of the family moved to Canada and praying she would soon follow. And Batoul, who was a teenager when she became a refugee and moved to Canada. The way she embraced her new life in Antigonish and came to inspire other students with her courage was a joy to write about.

ABT: The year 2020 has become Public Enemy Number One. But the Hadhad Family, and Tareq in particular, seem relentlessly positive. Theirs is, as as Ayetlet Tsabari puts it, “a timely tale of triumph.” How do you see your book’s role in the time of coronavirus?

JT: When I started writing it, I didn’t know what it felt like to live locked inside my house, terrified to go outside, and worried sick about my family’s future. Now I have a little idea – we all do.

Peace by Chocolate shows us how we can endure hard times with dignity, suffering dehumanization without losing our own sense of humanity, and how we can rebuild a new life on the other side of suffering and tragedy.

ABT: Although the details you reveal are new and unique, the Hadhad Family is well known and admired in Canada. Can you tell us a bit about the process of writing about, essentially, celebrities? That must present unique challenges.

JT: Tareq was my main translator and he only once declined to translate something for me – when I asked his uncle if he knew Tareq was a celebrity in Canada! Tareq blushed and changed the topic.

Lots of people know the story of Peace by Chocolate, but I want them to feel it. I don’t want people to read about a family losing everything and becoming refugees – I want them to experience it. And so in that sense, I mostly saw them as one of so many families afflicted by war, including all of the Syrian-Canadians who have joined us because of the Syrian war.

You’ll see Tareq not as a well-known entrepreneur, but as a son, brother and nephew, which is how he most sees himself. The entire family was so gracious and generous with me and always took time to answer my endless questions. Underneath the shine of celebrity, you’ll find something much better: good people.

ABT: What do you hope readers will gain from reading this book?

JT: I want you to cry when the Hadhads cry, to laugh when they laugh, to celebrate when they celebrate. And of course, to eat chocolate when they eat chocolate. What I gained from writing/reading this book was that we all have a wellspring of joy inside of us, and no cruelty from the world can plug it up. The water may travel deep underground at times, but it never stops, and – if we let it – it will rise once more to the surface, and nourish our world again.

I also hope we Canadians all realize how incredibly lucky we are to be here – born here, or here by choice. Our country has its problems, and pressing problems that need to be addressed. But we are lucky to do it in a country that values peace, order and good government; a country that welcomes everybody who wants to make the world a better place, piece by piece. Or should that be peace by peace?