The complications of self-discovery 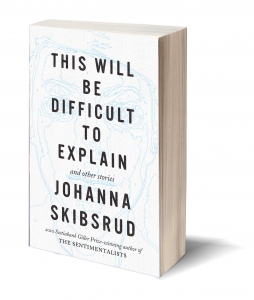 For the questing souls who inhabit Giller Prize-winner Johanna Skibrud’s This Will be Difficult to Explain and Other Stories, exploring place, whether by leaving home or staying firmly planted, can be the key to self-discovery.

Many of the characters in the nine stories that make up this collection have travelled far from home. Martha, for instance, has left the States in order to make a new life in Paris. In “French Lessons”, she struggles to communicate with her employer, and her ineptitude in the language leads to many inconvenient, and one embarrassing, misunderstandings. When Martha finally grasps the language, she discovers that it’s a disappointing accomplishment that allows her new life “…to slip into the ordinary, to begin the inevitable depreciation of things.”

On the other hand, Daniel, the narrator in “The Limit”, has remained rooted in the wide-open spaces of rural South Dakota. A visit from his once-loving but now-distant teenage daughter causes him to reflect on his seeming inability to influence his own life. A beautifully rendered memory from his own teen years allows him to make peace with himself and his daughter.

Though in her early thirties, Skibsrud has an uncanny ability to peer into the minds of people much younger and much older than she. In the titular story, she beautifully captures the confusion that children so often feel as the adult crises swirls around them. Yet, her writing is equally sage and believable when she explores a middle-aged woman’s desire for freedom and a life of her own in “Cleats”.

Ultimately, these stories take the reader on a journey around the world. And while the location and characters change, the very human preoccupations of longing to belong and striving to find meaning in life do not.

This Will be Difficult to Explain and Other Stories
By Johanna Skibsrud
$28.00, hardcover, 169 pp.
Hamish Hamilton Canada, September 2011