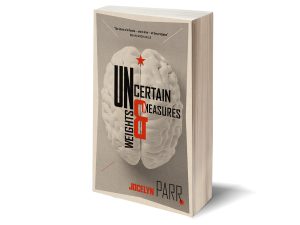 Montreal-based writer Jocelyn Parr’s debut novel begins with a bang: On a winter evening in Moscow, in 1921, Tatiana, a brilliant young science student, visits her favourite bookstore, Osorgins’, a haven for intellectuals and artists, increasingly under scrutiny by post-October Revolution Bolshevik authorities. Minutes after she lays eyes on the striking young artist, Alexandr (Sasha), the shop erupts in a fiery explosion. The young couple escapes, physically unharmed but forever changed. They marry three years later in the wake of Lenin’s death.

Moving forward to 1927, Tatiana secures research work at the Institut Mozga, aka “The Pantheon of Brains,” with her mentor and father substitute, Vladimir Bekhterev, a renowned and innovative neuroscientist. As Tatiana becomes increasingly drawn into her work of analyzing the brain tissue of exceptional men (including Lenin’s), Sasha, by contrast, becomes disillusioned, withdrawn and unable to paint. On a Christmas holiday with her wealthy and unwelcoming in-laws, Tatiana is devastated by the news of Bekhterev’s sudden death. Back in Moscow, tasked with dissecting her former teacher’s brain, she grows close to her Institute colleague, Luria, who piques her curiosity in the suspicious circumstances of Bekhterev’s death.

The young scientist’s marriage continues to unravel as Sasha feels stifled by a country he no longer understands and the two cannot reconcile their divergent views of life, art and science. When Sasha makes clear he must leave Russia to survive, they conspire to fake his death. Following his self-imposed exile, Tatiana begins to “see” and talk to him, an apt metaphor for their deep but fissured connection, of the dialogue between presence and loss that lies at heart of this story of personal and cultural transformation.

In this confident and accomplished novel, Parr creates a detailed portrait of a world haunted by the past but uncertain of its future direction. She builds her controlled, quietly intense narrative style in an ebb-and-flow motion, introducing an event then looping back to let details unfold gradually. A history professor at Montreal’s Dawson College, Parr reveals in an explanatory postscript that several members of her cast are inspired by real figures in the fascinating upheaval of early 20th-century Russia, as the country transitioned, violently, from a czarist oligarchy to Marxist-Leninist socialism. Most notably, Vladimir Bekhterev was a leading figure in the emerging field of neuroscience, now remembered primarily for his rivalry with Ivan Pavlov in developing new theories of behavioral psychology.

Tatiana is a compelling protagonist, incisive in her analysis of the world around her, determined, even as a girl, to escape the conventional domestic dependency of the women she sees around her. Parr’s story is deeply immersed in the dialogue–and perceived chasm–between science and art, exploring these ideas in the context of fully developed, flawed and searching characters. Central is the motif of time, how we experience the world both in and outside of linear progression. Early in the story, Tatiana is struck by a diagram depicting Husserl’s phenomenological theory of past and present:

The arrow is anticipation, what we project for our future, our imaginations moving forward at more or less the same rate as our memories move back until suddenly, again unbidden, the movement is broken by a memory, say, of a loved one and then we exist for a moment in no time and no place. The timelessness and placelessness of a scent or a sound: it exploded my heart just to think of it.

Time is one of the “uncertain measures” of the novel’s title, a seemingly ordered system that is punctuated abruptly by unanticipated events.

The novel is bookended by books. The destruction of Osorgin’s bookshop suggests a rupture of narrative, an alteration–if not obliteration–of history. Near the end of the story, following Sasha’s “death,” Tatiana discards belongings in preparation to move to an apartment for one. As she sorts through their book collection, reflecting that “books need to circulate,” she reassumes control of her own narrative.

Parr’s book tells us that our stories, whether individual or collective, are affected by factors both beyond and within our control. We can find new directions for them in art, science and love.