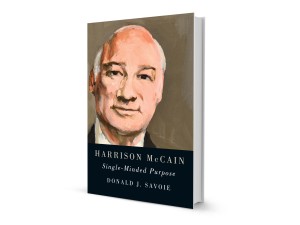 Donald Savoieâ€™s biography of Harrison McCain is truly a Donald Savoie work. The UniversitÃ© de Moncton academic, whose expertise on governance and regional development has made him a leading public intellectual in New Brunswick, examines the
McCain Foods co-founder through the prism of the Maritime economy.

For a scholar, Savoie is a deft writer, smart yet accessibleâ€”his anecdotes of McCainâ€™s blunt-yet-endearing manner are brisk and pricelessâ€”so he can be forgiven for the occasional and brief digression into other areas that interest him. He always gets back on track quickly.

Savoie is up front about his admiration of McCain, but doesnâ€™t shy away from faulting him for ignoring succession planning until it was too late; McCainâ€™s disagreements with his brother Wallace tore their family apart. The real question is whether another Harrison McCain is possible today. Savoieâ€™s answer is worth pondering for anyone hoping the Atlantic economy will be rescued by the emergence of another larger-than-life entrepreneur.