What I Learned About Politics: Inside the Rise –and Collapse– of Nova Scotia’s NDP Government 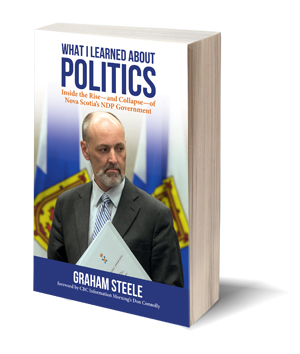 New laws can be proposed in both the spring and fall sittings. Anyone can propose a new law in the form of a “bill.” The bill can do something new, or it can amend or repeal an existing law.

In order to become a law, a bill must go through three stages. These are called “readings,” but the bill is not literally read aloud. The introduction of the bill is “first reading.” The bill’s sponsor stands and reads the title. The bill is then copied and distributed to all members. Approval in principle is “second reading.” That’s when most of the debate occurs. During second reading debate, any MLA can stand to argue for or against the bill. If a bill passes second reading, it moves on to a committee (“the Law Amendments Committee”) that hears from the public. From there, it passes back to the House for examination in detail (“Committee of the Whole House”). Final approval is “third reading.” And once a bill passes third reading, it becomes law when the Lieutenant-Governor signs it (“Royal Assent”). It enters into force on Royal Assent, unless the bill specifies a different date or permits the government to choose a date.

Throughout my time in the House (2001–2013) there were fifty-two seats. After redistribution in 2012, which took effect for the 2013 election, there are fifty-one seats. For the sake of consistency, I will use the number fifty-one throughout this book.

Apart from passing new laws, the principal business of the legislature is to approve the annual budget. In many ways, this is the true heart of democratic government. The formation of British-style government was motivated by the desire to control the raising of money through taxation, and to control the purposes for which tax money was spent. That is why only the government is permitted to propose revenue or spending measures. The budget’s importance is underlined by the rule that a government must resign if it loses a budget vote.

That’s it, simple and clear. Fifty-one elected representatives get together in a beautiful old building in downtown Halifax to debate bills and budgets. After the debate, they vote. The majority wins.

This is responsible government in action.

Except the Nova Scotia legislature doesn’t really work that way. It is, in fact, a parody of democracy.

The way it really works:

The first time I stood in the House to give a speech, on March 23, 2001, it was a special moment for me. Few people stand for public office, and fewer are elected. I had picked up some insights on the campaign trail that I wanted to share with my new colleagues in the House.

And so I was startled to realize, as I gave my maiden speech, that no one in the room, absolutely no one, was listening. In any other gathering of grown-ups, this would be shockingly bad manners. About fifteen minutes into my speech, I stopped, and you can almost hear the surprise in my voice:

MR. STEELE: … Just because the government has decided to build a new school to replace a sick, old school doesn’t mean that is the end of the issue. One of the most important issues in what I will call Fairview proper, the Fairview portion of Halifax Fairview, is what is going to happen to the old school site.

Mr. Speaker, I paused there for a moment because as a new member, I wasn’t sure if this level of noise was normal in the House, perhaps it is. It is something that I would like the members on the other side to hear…

But in the Nova Scotia legislature, ignoring the person speaking, and a general background clamour, is normal. Here’s Speaker Murray Scott in reply:

The ideal is that our elected representatives listen to each other carefully and make up their minds accordingly. The reality is that our MLAs mostly ignore each other: they chat with their neighbours, read the newspaper or a book, fill out the crossword, and in the fall sitting, sign Christmas cards. As technology has advanced, the in-House habits of our MLAs have changed too: now they watch movies, listen to music, and incessantly email and text. Look down from the public gallery, and you’ll see that most MLAs are peering at their smart phones or tapping on a laptop computer.

When our MLAs do pay attention to what someone opposite is saying, it is usually to heckle, interrupt, even insult. The last thing on their minds is mature consideration of someone’s argument, which is fitting, because the speaker is rarely making an argument worthy of mature consideration. The MLAs who stand to speak rarely do any research and usually read a script written by staff. They routinely speak off-topic, misrepresent facts, distort what others have said, and talk mostly about themselves and their constituency.

Of course the legislature has its moments of lucidity.

Occasionally the place can stand up straight, and be everything it’s supposed to be. These tend to be special occasions, when the tone is formal and everyone knows misbehaviour will jar. On some other occasions, an individual MLA will speak with real insight and real emotion. The House becomes still and attentive, because the members know they’re hearing the real deal. But these moments are rare. More importantly, they don’t persuade anyone to vote differently than they otherwise would have.

I have never worked in a place as thoroughly dysfunctional as the Nova Scotia legislature. Fifty-one grown-ups act in ways that, if repeated in their private lives, would end their personal relationships, and if repeated in other workplaces, would get them fired. Visitors to the gallery often go away shaking their heads in bewilderment, just as I had when I observed the passage of the Workers’ Compensation Act. Groups of schoolchildren watch grown-ups act in ways that they, the children, have been repeatedly told not to act.

Why does this happen? How did we get to this point? Does it have to be this way?

There should be no mystery here: MLAs are responding in normal, predictable ways to their environment. There are three environmental forces at work: MLAs’ background and experience do not equip them for legislative work, all substantial decisions on bills and budgets are made elsewhere, and party discipline drives all real debate behind closed doors. That’s why the House is a parody of democracy.

What I Learned About Politics
by Graham Steele
$21.95, paperback, 208 pp.
Nimbus Publishing, September 2014

Graham Steele was a member of the Nova Scotia legislature from 2001 to 2013. He was the minister of finance and minister of Acadian affairs (2009–2012) and minister of economic and rural development and tourism (2013) in the Dexter government. Graham is now heard regularly as a Nova Scotia political analyst for CBC. Before entering politics, Graham was a lawyer in private practice and in government. He is a Rhodes Scholar and originally from Winnipeg. He lives in Halifax.