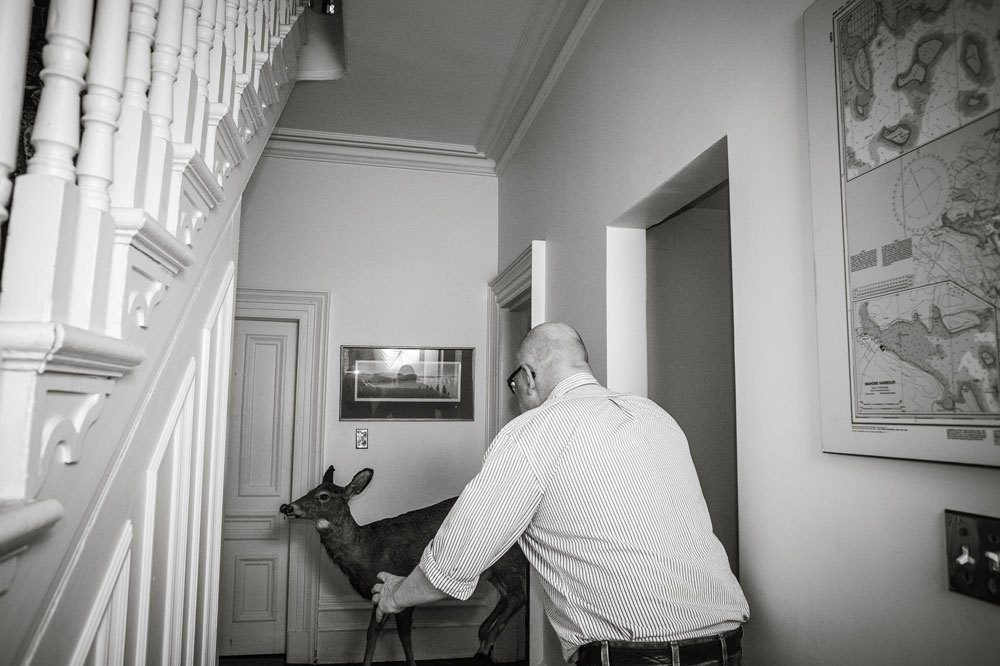 The first comedy or satire I wrote was for The Muse, the student newspaper of Memorial University of Newfoundland. In the fall of 1980 The Muse was part of a largely unorganized student crusade to do something about The Parkway, a four-lane highway that, owing to a kind of haphazard urban planning endemic to St. John’s, bisected the campus. Crossing the road was perilous and the student body wanted a remedy.

The Muse didn’t want to let the issue die so running a story about it as often as possible was a priority. But there was only so much one could say; the road was in the wrong place and presented a real danger to students; a safe crossing needed to be provided and soon. That was it.

I took the baton for the week of the October 17th edition, reporting on an imagined “Parkway Safari” motorsport event wherein drivers tore around campus trying to strike and kill students with their cars, scoring points as they did so. I enlisted a couple of pals to pose as victims for grisly photos of the contest. The piece did what I still suppose good satire does, issue a warning about where a stupid behaviour will land us if we don’t smarten up.

The paper was distributed throughout the campus in the morning. That afternoon a Memorial University student, a young woman full of promise, Judy Lynn Ford, was struck and killed by a car on The Parkway. I thought that horror rather proved the point of my piece. Not so most people on campus who read it after the tragedy. Many were unaware that it was written and printed before the accident and judged it, I can’t say unfairly if they believed it was in response, in horrendously bad taste.

Bad taste sometimes lends satire vitality. As it can be a knife or skewer satire can also be a blunt instrument. It can be a cudgel, a hammer. We say in Newfoundland “Foolish as a bag of hammers” to mean something or someone ridiculous. In other places there is “ugly as a bag of hammers” to mean that which is lumpen, misshapen, unwieldy. All that can be said of comic and satiric prose.

The outrage over the Parkway piece didn’t much bother me; my heart was colder then.

Energies soon found focus in a spontaneous act of civil disobedience, students marching across a crosswalk on The Parkway in an uninterrupted, endlessly looping line so as to permanently arrest the flow of traffic. The cops arrived and handled things poorly, the protest escalated to the point where the police considered it best to beat a retreat. Barricades were erected and the students occupied the highway for a glorious weekend, until commitments were given to build an elevated pedway over the road.

In the years since, I’ve written four novels and a couple of feature-film screenplays, notably the adaptation of my comic novel Rare Birds. I wrote a bunch of episodes of the television industry satire Made In Canada. I’ve kept up writing for print media and have written for the stage. I spent the most creatively rewarding five years of my life writing for the CBC Radio show The Great Eastern, a program I have no hesitation declaring among the very best examples of scripted radio in the history of that medium. (Why the show isn’t podcast by the CBC is an unfathomable mystery.) The Great Eastern was a more sophisticated comedy than the CBC brass was comfortable with in a show coming out of Newfoundland. A CBC Vice President cautioned us, “No more jokes about French philosophers.” We paid him no heed and CBC canned us one season before the project was completed.

How have things changed since I started out almost forty years ago? In four decades what is funny and how comedy works hasn’t changed much. The audience has; it’s grown timid. The pieties of Political Correctness have scared people off that which is transgressional. People are afraid to laugh lest it be heard as laughter “at” something.

So it was that two people, on separate occasions, told me they put down my novel Today I Learned It Was You because they were “afraid of where it was going.” At the centre of that novel is a report that a one-time thespian sleeping rough in a public park in St. John’s is “transitioning” from man to deer. Spoiler alert: he isn’t doing any such thing. The ridiculous proposition that he is, a bit of dark mischief by another character in the novel, is embraced by a gullible public to such a degree that confessing the deed becomes unthinkable. Those readers “afraid of where it was going” never read far enough to grasp that the central joke was their very fear. That’s where we are.

Satire is a distant early-warning system. Without it the most unlikely and absurd consequences befall those who haven’t imagined the world at its most preposterous.

The speech police, these days as likely to come from the smouldering ruins of the political left or the Academy as from the Church or the Mosque or the Presidential Palace, are making it more difficult and more dangerous to sound the alarm. If there was ever a time to reach into the bag for a hammer it’s now.

Edward Riche is a novelist, playwright and radio and screenplay writer in St. John's. His latest novel is Today I Learned It Was You.