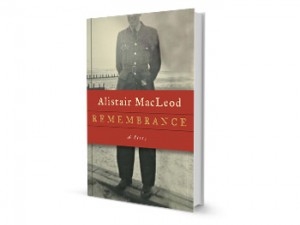 Alistair MacLeod’s last published story shows the writer with full literary powers, master of plot, character and understanding of the human condition with its attendant pains and glory in the extraordinary lives of ordinary people.

Remembrance is a saga, only 56 pages, it has the feel of a novel. It covers three generations in the lives of a family devastated by the horrors of war suffered by inadequately trained soldiers and the desperation of loss by relatives at home.

The story is a testament to William Faulkner’s insight: “the past is not even past.” It goes on in lives of survivors who, like psychological apothecaries, transform the lead of history into the gold of successful living.

Like all of MacLeod’s stories, Remembrance demonstrates the enduring spirit of people, their capacity for faith, hope and love.

Remembrance was published previously as a chapbook in 2012 to commemorate the twenty fifth anniversary of the Vancouver Writers’ Fest and subsequently as an e-book. But now it’s available in bookstores in a hardcover gift edition so collectors of MacLeod’s work can add it to their shelves.