Set in a generic Fredericton suburb called Skyline Acres, this is the fictional biography of Martin Peters, a teenager with type 1 diabetes. 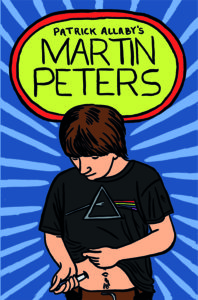 With charmingly direct and simple drawings, Patrick Allaby leads us through a compelling true-life coming-of-age story that digs deep into the social life of teenager Martin Peters in Fredericton, beginning in 2009.

If teenage life weren’t fraught enough, Martin’s is complicated by Type 1 diabetes. His parents are overly protective, having witnessed his father’s father suffer and die an early death from the disease. As a result, he’s a socially stunted kid. We meet him as he begins to stumble dumbly through a relationship of sorts with a new girl at school who shares his love of Pink Floyd. She takes the lead. Almost predictably, it descends from pleasantly awkward to nearly tragic, and there’s rejection of all kinds, of course. It’s high school.

Allaby’s genius lies in more than his facility with a pen. He’s a natural-born storyteller.

Martin Peters is not just a tale of a painful adolescence complicated by a life-threatening condition. Allaby skillfully takes us out of the story on several occasions to vividly show his own struggle with diabetes and his awkward relationship with the real Martin Peters while involved in the creation of this story. He also invites the reader into the hard-slog process of developing a graphic memoir without making us feel in any way removed from the story arc.

What I’ve always enjoyed about memoirs is that they’re like, well, life. Nothing is wrapped up neatly, but still, the recognition of reality is comforting, even if the reality itself is not. This is especially true with Martin Peters. I couldn’t stop reading it and landed comfortably at its conclusion with the rueful thought, “Yup, that makes sense.”

Martin Peters is an excellent addition to the canon of Graphic Medicine, a recent genre that mergers comic arts with health-care issues as an escape from system-speak and pityparties. It’s a genre that’s about showing it like it is, whatever “it” reveals about people, conditions, systems or simply living with a body and mind that suffers.

Like the best in this genre, Martin Peters tells a truth that honestly resonates on many levels.

—Susan MacLeod is a writer, visual artist and cartoonist.
Her work has appeared in Lion’s Roar.