Tales from the harbour 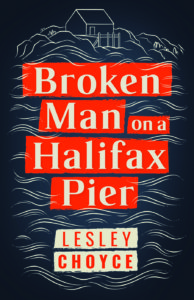 This summer, I took my grandchildren back to the little village in Scotland where I grew up. Dunlop’s population of 700 distinctive souls made it a “wee” village, where everyone knew everyone. As we roamed its streets, my 12-year-old grandson, Alistair, was astonished to learn that as a boy I became a commercial garden digger, under the instruction of the local gravedigger.

“You knew the gravedigger?” he asked.

To a boy raised in the stratified world of Toronto, that sort of inclusive community was unthinkable. And that is precisely the sort of community we plunge into in Lesley Choyce’s fine novel, Broken Man on a Halifax Pier.

Stewart Harbour, on Nova Scotia’s ruggedly unfashionable Eastern Shore, is a backwater village where a few stubborn fisher families hold out against banks too bored to even close them down. It is the town where Charles grew up, and then escaped—just as soon as he could—to Dalhousie, and a King’s journalism degree.

He has never been back, and then, in the dramatic opening scene, everything changes as Charles’ writing career is destroyed by the death of his paper and his savings swindled away. He finds himself, indeed, a broken man gazing morosely into the waters at the end of a Halifax pier, when a woman appears out of the fog. She offers to buy him breakfast. They hit it off, and their lives change.

Her name is Ramona Danforth. A Halifax woman with a history in TV and minor movies, she also has an impressive bank account. But she feels rootless, so Charles takes her, in her Lexus, back to Stewart Harbour, where his father’s old fishing shack still stands, and his old boat still floats.

There, the brave couple encounter more than expected. Although no gravedigger appears, locals remember them, and an unsuspected son emerges from the past. Soon the idyllic return “home” is plagued with problems, situations so serious that Charles and Ramona are compelled, on different occasions, to offer the other a chance to walk away from it all.

The tight, exciting plot allows Choyce, the seaworthy Lawrencetown author, to do his impressive writing: “As a kid I’d seen winter storms with waves towering at thirty feet and winds that could suck your skin off, but you’d never hear a word about those on the news.” And later, he describes a hurricane so terrifying, readers might feel the urge to batten down the hatches.

Choyce has crafted an impressive novel about the power of the sea, the power of community and the power of memory. And he also happens to have told a fine love story.

Douglas Gibson is a former Canadian book publisher, a stage performer, and the author of Stories About Storytellers, and Across Canada By Story.