The Cartographer of No Manâ€™s Land 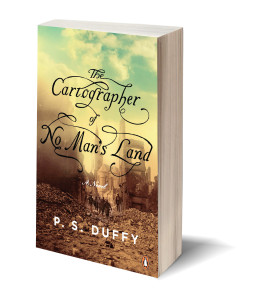 For readers with time for only one book to mark the 100th anniversary of the start of the First World War, I recommend The Cartographer of No Manâ€™s Land, a novel by PS Duffy, and a sensitive examination of post-traumatic stress disorder.

The sources of PTSDâ€”which was referred to at that time as â€œshell shockâ€â€”whether physical or psychological, were hotly debated within the military. Although it was highly destructive to its victims, it was often regarded as a sign of cowardice.

Duffy expertly characterizes the devastation that PTSD can wreak upon a man and his family. Angus MacGrath, a Nova Scotian sailor, is wounded in body and soul by trench warfare, while the carefree and adventurous Ebbin deteriorates into a fugue state.

The Cartographer of No Manâ€™s Land focuses upon the far-reaching emotional cost of war, but also celebrates the resilience of the human spirit, which ensures that weâ€”the descendents of these soldiersâ€”remember their sacrifice.