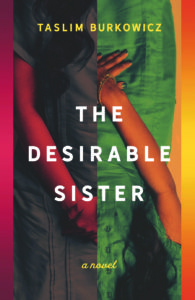 Taslim Burkowicz’s The Desirable Sister describes the lives of sisters bonded by their ethnicity, but cleaved apart by their colour. It surveys a Gujurati family twice removed from their homeland and divided manifold by desire, ego, tradition and all of the accompanying angst that arises out of an identity in disarray.

Sisters Gia and Serena Pirji come of age in the 1990s in homogeneous Burnaby, BC, where Gia’s fair skin enables her to blend into the surrounding whiteness with ease and comfort. Conversely, Serena encounters constant, though often unintended, prejudice as a result of her brown skin. Their grandmother calls them two halves of the same coconut—the sweet, white inside and the coarse brown outside (this is one of the gentler insults that sets the tone for much of the novel).

The story is one of immense intimacy, fleshing out the intricacies of family quarrels. But the narrative never develops tunnel vision; rather, the much broader context of colonized and colonist Indians, diaspora and displacement pervades the novel. Bukowicz sets the Indo-Canadian experience against the relatively unexplored backdrop of Gujarati colonialism in Uganda in the mid-twentieth century, offering an interesting take on the common plight of dispossessed first-generation immigrants. When Serena leaves the family home, embarking on the bland beigeness of the Burnaby condo world, her mother Zeenta surreptitiously plants a bowl of mangoes on the table meant to instill a sense of homesickness. Meanwhile, Kasim, the father of Serena and Gia, considers the futility of the plan since neither of them agrees on what home even means.

Indeed, the question what is home? is one the novel asks relentlessly. The sisters, both eager to flee the family home at different moments, find themselves crashing and visiting in futile attempts to confront a more existential homelessness. Gia finds temporary solace in the tabula rasa of Serena’s Burnaby condo, while Serena—who never checks the depth of the water—dives headfirst into one disastrous romance after another, each time cobbling a toxic relationship into an impermanent home.

Between the Greater Vancouver Area, Nairobi and Goa, the novel makes a point of placing the sisters into awkward cultural conflicts—conflicts usually borne out by the distinction in their skin tones, and ultimately resolved by the bond of sisterhood.